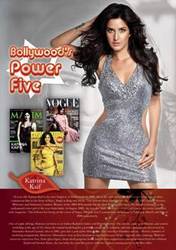 Robin Raina Foundation (RRF)'s Lifeline magazine announced today its Annual rankings for the most powerful women in the world, in many fields ranging from politics, business, charity, entertainment, media, literary circles, fashion, singing to sports etc. This rating was announced today as a part of the January 2009 magazine issue dedicated to the women who have reached the pinnacles of excellence or power in their respective fields.

The detailed Top five rankings in each field and the reasoning behind the rankings, arrived at after many months of analytical research can be found in the January print issue of the Lifeline magazine as also can be read on http://www.rainafoundation.com/Lifeline

A brief glimpse into the top two rankings (out of the TOP 5 Rankings in the magazine), based on their accomplishments in the year 2008, is as follows:

The remaining rankings can be seen on http://www.rainafoundation.com/lifeline

About the Robin Raina Foundation
A 501(c) charity, Raina foundation has been setup to raise funds for work to be carried out to empower under-privileged children and their parents, who need help around the world. The foundation has undertaken India's largest private charity initiative to build 6000 free homes for the slum dwellers of Delhi. The foundation's focus is to make a difference in the lives of children - who are handicapped, blind, mentally challenged, sick or in need of urgent medical help and underprivileged kids who need education. All donations to the foundation are 100% tax-exempt.

Lifeline is Atlanta based Robin Raina Foundation's media initiative targeted at being the voice of charity and the have-nots in the World. The magazine has been in existence for the last 4 years and is presently distributed across the United States. The magazine can be read on http://www.rainafoundation.com/Lifeline