In Spite of the Economy, YellaWood® Launches Most Aggressive Marketing Effort Yet

Everything about the economy seems to be bad news right now--companies cutting jobs, homes in foreclosure, retirement savings lost, every industry looking for a bailout. Here's a "silver lining" story about a CEO whose company is making their biggest-ever investment in growth, and they are doing it with a keen sense of the values that made America great along with a self-depricating sense of humor. 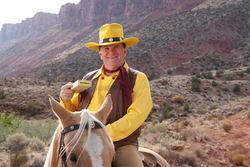 We hope that, by attracting them to our website, they will enjoy a few new features such as the dealer locator function. With this new feature, our customers can find out quickly and easily where our products are sold. They can also follow the storyline of the commercial series.

"We're having a lot of fun with this new series of television commercials promoting YellaWood® brand pressure treated pine, our flagship product, " said Jimmy Rane, chief executive officer of Great Southern Wood. "We think this is a great time for a consumer-friendly promotion with weekly prize giveaways, which we realize is rare in an economic downturn. We're always focused on providing our customers with top-notch products, and we're excited to be increasing our interaction with dealers and directly with consumers."

Rane said experience has shown that during economic times like this, U.S. homeowners focus on enhancing the value of the homes they are in rather than building or buying new homes. "Just because the market for home sales is not as vibrant as it has been over the past several years, American homeowners won't stop making improvements to what they have," Rane said. "We want to offer them a little encouragement and let them have fun doing it."

The "Cliffhanger Series" is a suspenseful progression of television commercials that aim to drive consumers to the Yella Fella website, http://www.yellafella.com, where they can enter the YellaWood® Weekly Western Sweepstakes and the Instant Win Game, and learn more about YellaWood's® array of building products. The television spots, set in the Old West, feature Rane as the popular Yella Fella character, well known from YellaWood's® industry-leading advertising campaigns, as he seeks to save the town of Rotwood. In addition, the Grammy award winning, Western music and comedy band, Riders In The Sky, will play a supporting role in the commercials.

Weekly drawing dates and prizes are as follows:

"We've put together a list of prizes that we think will grab our customers' attention and truly be of great value to an individual or a family," said Rane. "We hope that, by attracting them to our website, they will enjoy a few new features such as the dealer locator function. With this new feature, our customers can find out quickly and easily where our products are sold. They can also follow the storyline of the commercial series."