The sparkle of gold helped Senator Katherine Laforge launch her 2004 quest for the Presidency. The allure of treasured coins have excited many leaders from Emperor Augustus right up to Senator Laforge whose penchant for rare and history-rich coins eventually helped her assemble a collection worth over $3,000,000. 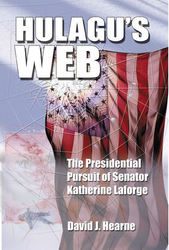 I used Mike Fuljenz as the numismatist in my story because he is the type of consummate coin expert that would have been needed by Katherine Laforge to assemble the valuable rare coin collection needed to fund her campaign. Fuljenz is also a very personable and unique individual who makes a great character in a story.

Novelists have long had an obsession with precious coins because of the stories of romance, power and wealth associated with them. In Ian Fleming's "Live and Let Die" an underworld voodoo leader uses his hoard of rare gold coins to finance a Soviet spy operation in America. In David Hearne's "Hulagu's Web – The Presidential Pursuit of Senator Katherine Laforge", a collection of rare coins are sold to launch the Senator's Presidential bid.

The gold coins in Ian Fleming's book were the fabled treasured collection of pirate Sir Henry Morgan. In Hearne's novel, the rare coins were from the heroine's own collection selected and sold by a character referred to as a well known numismatist named Mike Fuljenz. This novel's character is in fact the flesh and blood Mike Fuljenz of Universal Coin & Bullion.

Hearne stated, "I used Mike Fuljenz as the numismatist in my story because he is the type of consummate coin expert that would have been needed by Katherine Laforge to assemble the valuable rare coin collection needed to fund her campaign. Fuljenz is also a very personable and unique individual who makes a great character in a story."

"She handed me a small plastic container displaying an old worn coin of some sort. On the case was a label that read 'Ilkhanids, Hulagu 654-663 AH.'" An excerpt from Hulagu's Web – The Presidential Pursuit of Senator Katherine Laforge."

In Hearne's novel, coins are also used as mementos and as a form of calling card or "Challenge Coin" to indicate the identity of a clandestine character. The primary coin used for this purpose is an ancient coin referred to as the Hulagu coin which is actually the Silver dirham of Hulagu khan. This is not a popular coin among numismatists but it was apropos to the Novel because it represented the two conquests of Baghdad Iraq, once by Hulagu Khan in 1257 and then by the Hulagu Khan of this century which George Bush was referred to by Saddam Hussein in his speeches.

Hulagu's Web is a story that has a numismatic thread rippling through it but its primary plot evolves around a series of assassination attempts on Senator Katherine Laforge culminating in the tragic 2004 attack near Charlestown NH, and the events leading up to the deadly event. In her quest for the highest office in the land, Laforge garners the enthusiastic support of millions of Americans because she dares to offer real solutions for the challenges facing society. However, her exuberance as a candidate also infuriates and frightens numerous high-placed individual who feel their power and wealth threaten by her platform. Voters also support her and her backers because they perceive Senator Laforge as a candidate who is fighting for the democratic principles originally drawn up by the American forefathers.

“Hulagu’s Web – The Presidential Pursuit of Senator Katherine Laforge” is a brilliant and slashing indictment of today’s political scene that struggles with some of the most prevalent political problems of our time. The book is an ingenious and fast moving story, spiced with assassination, conspiracy, action, mystery, deception, suspense, love, hate, politics, and even faith. It provides a fresh and original way to think about democracy, political process, and corporate greed. The uniqueness of the story is in part because it mixes fictional characters with flesh and blood icons, like Mike Fuljenz of Universal Coin & Bullion, Professor Michael Briggs of UHN, Judy Treichel the Executive Director of the Nevada Nuclear Waste Task Force and others into confrontations to solve real life problems the public and politicians face in contemporary America.

Emerging from the pages of Hulagu’s Web is a thesis that members of congress and groups of businessmen could clandestinely work together, backed by substantial funds, to corrupt the present democratic system and establish their own plutocracy. Unfortunately, the proposition is a believable scenario and as the story unfolds, some will find themselves wondering if this scenario has not already happened. Hulagu’s Web is more than a novel of political intrigue; it questions and thoughtfully considers grave problems of our contemporary, global society.

David Hearne is a former military officer who has been involved in the IT Industry for the last 20 years. His last book was a 500-page book called “Enable Command Performance”. This was an exhaustive and comprehensive reference to the Enable Procedural language, a scintillating read for the Dilbert crowd. He also has written numerous articles on technology and interviewed its luminaries like Ted Wait the founder of Gateway 2000 Computers, Heidi Roizen the founder of T/Maker and a Vice President of Apple Computer.

Mike Fuljenz is the President of Universal Coin & Bullion and also a well-known numismatic author who has written numerous books relating to coin collecting, such as “The Collector’s Guide to Indian Head Quarter Eagles,” “The Collector’s Guide to $10 Indian Head Eagles.” and other titles. He is also the recipient of 25 Numismatic Literary Guild (NLG) Awards, including three NLG Book of the Year awards in a specialized category.