Ben Cerullo Speaks to Freetown Mayor, City Council and to the Nation on UNRadio 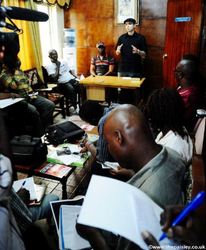 Years of civil war have resulted in devastating poverty, unemployment, and suffering. I believe that God wants to bring hope and a new wave of freedom to those who live in this region.

The Sierra Leone crusade of U.S. evangelist, Ben Cerullo, quickly galvanized the people and leaders of Freetown during its opening day. Prior to the first night of the four-night crusade (Thursday, March 5), Cerullo was hosted by the Freetown City Council (FCC) where he spoke with community leaders and Mayor Herbert George Williams. Earlier on Thursday, members of the Freetown media set up a local press conference with Cerullo and his team.

The opening night attracted nearly 7,000 people to the Brima Attouga Kamara Mini Sport Complex, sending a wave of hope through the nation and its Christian leaders. This is the first major crusade held in Freetown since 1991.

"After we got back to our hotel around midnight, Ben received a call from Sierra Leone's national UN Radio," noted Greg Webb, Cerullo's international coordinator. "They asked if he would do an interview programme at 8:00 AM." The rare invitation resulted in phone calls from across Sierra Leone.

"These interviews and meetings have piqued interest and will help draw even greater crowds for God to touch," said Cerullo. He noted that people are coming from throughout the country. "One woman walked over 140 miles to the crusade.!"

Cerullo's visit to Freetown was at the request of Bishop Augustine Kamara, National Director of the Church of Pentecost, and Bishop Julius Laggah, pastor of Bethel Cathedral of Praise. They lead a prominent group of Christian pastors in Sierra Leone who extended the invitation. Cerullo said that he had accepted the invitation because of a growing burden for the people of this small country on the west coast of Africa. "Years of civil war have resulted in devastating poverty, unemployment, and suffering. I believe that God wants to bring hope and a new wave of freedom to those who live in this region."

For more information about the crusade visit http://www.freetowncrusade.com or to schedule a media interview with Ben Cerullo, contact Melissa Prince at mprince(at)insp.com.

About Ben Cerullo
Named by Charisma Magazine as one of the "30 Emerging Voices" that will lead the church in the next decade, Cerullo stepped from in front of the cameras at the youth/young adult ministry Steelroots in 2007 to launch Ben Cerullo Ministries. The ministry continues Cerullo's passion and commitment to bring the Gospel to not only young people, but people of all ages and backgrounds throughout the nations of the world. Cerullo has ministered to thousands of people around the world with Christian leaders during campaigns in Bogotá, Columbia; Maracaibo, Venezuela; Gabon, Africa; the Democratic Republic of Congo; Taipei, Taiwan; and Tabasco, Mexico. For information about these and other ministry activities from Ben Cerullo Ministries visit http://www.bencerullo.com.