In 'Sarah Palin: Poised to Become America's First Female President', Recaldo Ochoa explores the life and times of a politician he believes was wronged by the media. He reintroduces Americans to an exceptional American woman, Governor Sarah Palin, who has the character, the qualification, the attributes--intelligence, judgment, leadership ability, and experience--and the unprecedented historical opportunity to become the first female president of the greatest nation on earth. 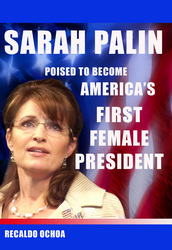 but she has the intelligence, judgment and leadership ability to lead the country.

'Sarah Palin: Poised to Become America's First Female President' by Recaldo Ochoa aims to debunk the false persona that he suggests was created by the press to discredit Palin and ruin her chances of success.

Sarah Palin is often viewed as a polarizing figure, states Ochoa, people either seem to love her or hate her. In 'Sarah Palin', he sets out to separate the myths from the truths about her life and her service in government. Analyzing her personal and political journey, Ochoa means to give readers a second look at the governor so that they might make up their own minds about this controversial figure.

When Palin was announced as John McCain's running mate, Ochoa was determined to learn more about her. He wrote this book to defend her against attacks on her intelligence and character during and after the presidential election. In chapter after chapter, Ochoa delves into Palin's personal and public life, including her work as governor of Alaska, where he feels she put her career on the line fighting for the interests of the people she represents. "She may be a hockey mom," states Ochoa, "but she has the intelligence, judgment and leadership ability to lead the country."

For more information or to request a free review copy, members of the press can contact the author at rochoa (at) creativeanswersforyou (dot) com. 'Sarah Palin: Poised to Become America's First Female President' is available for sale online at Amazon.com, BookSurge.com and through additional wholesale and retail channels worldwide.

About the Author:
Recaldo Ochoa teaches high school American history, United States government and world history. The recipient of a bachelor's degree in psychology, master's degrees in history and education, he lives with his wife in Acworth, Ga.