Partnership aims to get K-8 involved in ways to reduce global warming. 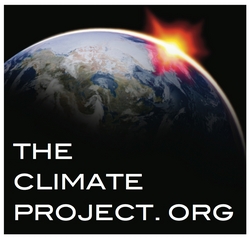 The Climate Project, an international non-profit founded by Nobel Laureate and former Vice President Al Gore, is announcing its partnership in an educational outreach venture with Cool The Earth, an organization that inspires children grades K-8 and their families to take simple actions at home to lessen the threat of global warming.

"By aligning with organizations that have built successful regional models like Cool The Earth, The Climate Project can reach more people and create momentum exponentially. The climate crisis is an urgent issue that affects everyone. Cool The Earth is an example of citizen involvement at the grassroots level which can make a difference when it comes to protecting our planet," says Jenny Clad, Executive Director of The Climate Project.

"We are excited to partner with this prestigious organization in our fight against global warming," says Carleen Cullen, co-founder and executive director of Cool The Earth. "Our school-based program offers families easy-to-take actions to decrease energy consumption and increases civic engagement in climate change solutions. Coupled with The Climate Project's message, we feel our program has the potential to serve as a catalyst for turning communities across the country into more energy-efficient and energy-conscious consumers."

For Carleen Cullen, who co-founded Cool The Earth with her husband, the partnership with The Climate Project is particularly meaningful because she was originally inspired to form her organization after viewing the Gore film An Inconvenient Truth. Concerned for the future of her children and future generations, she launched Cool The Earth at her children's elementary school in Kentfield, CA in the spring of 2007. Within two years the fledgling organization has been able to galvanize parents and leaders in the community to expand the program to 150 schools and youth groups throughout the Bay Area.

Cool The Earth is also honored to announce this week that they have received a "Clean Air" award from "Breathe California" for contributions in the area of public awareness and education. Carleen Cullen is a recent recipient of the Jefferson Award, a program of the American Institute for Public Service. Additionally, Cool The Earth has received awards from the City of Sonoma, The Pacific Sun Newspaper, and has garnered attention in Parents Magazine, The San Francisco Chronicle, Treehugger.com, The Huffington Post, Marin Magazine, The Marin Independent Journal., The Wall St. Journal, and Kiwi Magazine.

About Cool The Earth
Through its extracurricular program, Cool The Earth (CTE) educates K-8 students about global warming and provides them the tools to motivate their whole family to take simple actions to reduce their residential carbon emissions. The rapidly expanding program, running in over 150 schools and youth groups, has now been responsible for motivating over 37,000 energy-saving actions, taken by over 25,000 families, and eliminating approximately 30 million pounds of carbon.

About The Climate Project
The Climate Project (TCP) is an international non-profit organization founded by Nobel Laureate and former Vice President Al Gore. With its global headquarters in Nashville, Tennessee, TCP began operations in June 2006 with the mission of increasing public awareness of the climate crisis in the United States and abroad. TCP consists of a professional staff and more than 2,600 volunteers worldwide who have been personally trained by Gore to present a version of the slide show featured in the Academy Award-winning film An Inconvenient Truth. In 2009, TCP expanded its mission with a new commitment to advocacy and activism to combat the climate crisis.