Event will bring together digital entertainment executives and media buyers. 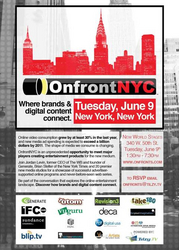 We set out to create a forum to foster a better understanding between content producers and advertisers on how to create a shared value proposition; and judging by the response, I would say we're not alone in wanting to see that vision realized.

Tilzy.TV, a leading news source for the Web television and digital entertainment industries and the founding organization behind the upcoming Onfronts, today announced it has added actress/producer Illeana Douglas (To Die For), video entertainment network Crackle (Angel of Death) and new media studio Vuguru (Back on Topps) to the event's list of content partners that will showcase exclusive clips from their current slate of premier Web shows for an audience of brands and media buyers.

Crackle, a unit of Sony Pictures Entertainment, will screen a clip from its highly anticipated actioner, The Bannen Way along with scenes from the first season of its hit original female assassin series Angel of Death. Vuguru, the new media studio owned by Michael Eisner's Tornante Company will world-premiere footage from the upcoming season of its genre-defining Prom Queen franchise and Douglas will be on hand to officially announce what's "in store" for the second season of her critically-acclaimed Web comedy, Easy to Assemble, which follows Douglas and her celebrity friends as they eschew the Hollywood lifestyle for 'normal lives' working at the Burbank IKEA.

Video publishing platform Delve Networks, in-stream video advertising company ScanScout, mobile video publisher Metronome and CJP Communications, the multimedia marketing firm and content studio have signed-on as sponsors of the first-annual event which will lead-off with a keynote presentation by Jordan Levin, CEO of Generate, the multiplatform media company which recently began production on its latest drama series, The Lake, directed by Jason Priestley which bows August 10th on TheWB.com.

"The response from both digital entertainment executives and agencies has been overwhelming," said Jamison Tilsner, CEO and co-founder of Tilzy.TV. "We set out to create a forum to foster a better understanding between content producers and advertisers on how to create a shared value proposition; and judging by the response, I would say we're not alone in wanting to see that vision realized."

The Onfronts program will also feature New York Times media reporter Brian Stelter moderating an agency panel comprised of executives from Ogilvy, Digitas' The Third Act and Deep Focus, that will discuss the value of premium Web series and related branded entertainment as platforms for advertising and product placement.

The Onfronts are powered by Tilzy.TV - the leading publication in the digital entertainment revolution and a founding organization behind The Streamy Awards and The International Academy of Web Television. Onfront NYC is the premier opportunity for digital content-owners to showcase a vibrant new entertainment medium and present upcoming projects to press and major advertisers dedicated to high engagement entertainment opportunities. Onfront NYC is being held June 9, 2009 at New World Stages in New York City. For more information, visit http://onfronts.com.

Tilzy.TV is a leading resource for the branded entertainment industry.Tilzy logo