Award winning artist and designer Tom Wilkes died unexpectedly on Sunday, June 28 at his home in Pioneertown, CA at the age of 69. Wilkes was the art director of the Monterey International Pop Festival in 1967. He designed many classic album covers like Rolling Stones' "Beggars Banquet" and Neil Young's "Harvest." He was awarded a Grammy in 1974 for Best Recording Package for "Tommy" as performed by the London Symphony Orchestra and Choir. 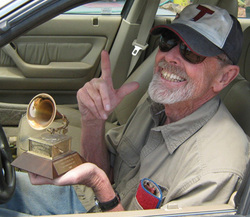 Tom Wilkes and his Grammy Award, taken a few weeks before his death in Pioneertown, CA. Photo by Fritz Drumm

Renowned album cover artist and designer Tom Wilkes died unexpectedly on Sunday, June 28, at his home in Pioneertown, California. He was 69.

Thomas E. Wilkes was born July 30, 1939 in Long Beach, California and was raised in southern California. He attended Long Beach City College, UCLA and the Art Center College of Design in the 1950's and 1960's.

In 1967 Wilkes was the art director of the Monterey International Pop Festival. He created all graphics and printed materials for Monterey Pop, including the program book and the festival's psychedelic and iconic foil poster.

From 1967 through 1969, Wilkes was the art director of A&M Records. He was partner with Barry Feinstein from 1970 through 1973 in Camouflage Productions, which became record label Blue Thumb's house art department.

He was partner in Wilkes & Braun, Inc. from 1973 through 1974, and art director of ABC Records from 1975 through 1977. In 1978 he started Tom Wilkes Productions and became President of Project Interspeak, a not-for-profit environmental and human rights organization devoted to planetary enhancement programs.

Wilkes designed and directed such hit record covers as Rolling Stones' "Flowers" and "Beggars Banquet", Neil Young's "Harvest", and George Harrison's "Concert for Bangladesh" and "All Things Must Pass."

He received a Grammy Award in 1974 for Best Recording Package for The Who's rock opera "Tommy," as performed by the London Symphony Orchestra & Choir.

Among his many album cover credits:

He recently completed a book of his artwork and memoirs, called "Tommy Geeked a Chicken," and was negotiating publishing arrangements. At this time, plans are being made to proceed with publication of the book.

A memorial service will be held for Wilkes on Saturday, July 11th, in Orange, CA.