Baseball Fans and Dignitaries to Enjoy a Taste of St. Louis at 2009 MLB® All-Star Game® and Hospitality Events 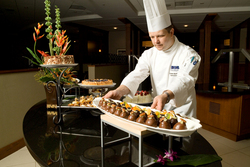 Where better to showcase St. Louis and its cuisine than at baseball's Mid-Summer Classic

When it comes to baseball and food, a quintessential summertime pairing, St. Louis is one of a very few cities with rich traditions in both.

So it's fitting that when the city plays host to the 2009 Major League Baseball® (MLB) All-Star Game® at Busch Stadium® next week, it won't just be a celebration of St. Louis natives Yogi Berra and the late Jack Buck and St. Louis Cardinals® legends Stan Musial, Lou Brock and Bob Gibson.

Also receiving their due, thanks to Chef Jeramie Mitchell of Delaware North Companies Sportservice, will be St. Louis specialties - braised beef brisket and toasted ravioli, to name a few - as well as the distinct Italian and German neighborhoods and fertile agricultural regions of Missouri that inspired them.

Mitchell is the top chef at Busch Stadium and one of four regional executive chefs for Sportservice, the longtime concessionaire for the St. Louis Cardinals and many other major professional sports teams. He has been planning and will oversee Sportservice's massive culinary operation for the All-Star Game - at both Busch Stadium and MLB's two main hospitality events outside the stadium.

"Where better to showcase St. Louis and its cuisine than at baseball's Mid-Summer Classic," said Mitchell, who is certified as a chef de cuisine by the American Culinary Federation® (ACF). "St. Louis is one of the very best places in America to experience how authentic regional foods can complement baseball."

For the July 14 All-Star Game and Home Run Derby® the night before, Mitchell will oversee normal Busch Stadium culinary operations, including club and suite dining and concessions, to feed 40,000-plus fans attending each night. Of course, there will be traditional ballpark fare such as hot dogs, Italian sausage and nachos. Cardinals fans lead the Majors in consumption of nachos, putting away nearly a half-million orders in 2008. Hand-rolled pretzels, calzones and lighter fare such as salads and veggie burritos will also be on the menu.

But attending a game at Busch Stadium also means having a pulled pork sandwich smothered in thick, sweet St. Louis-style barbeque sauce and smoked beef brisket slathered with Mitchell's own made-from-scratch rub and then slow-smoked in the stadium's smokers for 12 hours.
In the clubs and suites, Mitchell will enhance the menus with additional entries such as Copper River salmon and Chianti-braised short ribs.

But Mitchell will really be able to showcase St. Louis with Sportservice's catering of MLB's late evening All-Star Gala after the homer derby on July 13 and All-Star Pre-Game Party the afternoon before the game.

About 4,200 guests, including team owners and dignitaries, are expected to attend each event. It is believed to be the first time MLB has selected the concessionaire for the game venue to also cater the off-site parties, which this year are taking place in a tented hospitality center being created at Ballpark Village near Busch Stadium.

Mitchell developed St. Louis- and Missouri-themed menus that include culinary traditions from several city neighborhoods and the region. Serving stations in the hospitality tents will be organized around these themes:

Mitchell said Sportservice has worked hard to source as much of the food as possible from the state of Missouri or a 150-mile radius of St. Louis. The produce will come from local farms, the beef will be Missouri grass-fed, and Sportservice will serve Missouri cheeses and wines, he said.

Beverages being served at the All-Star Gala and Pre-Game Party are from Anheuser-Busch, PepsiCo, E. & J. Gallo Winery, Bacardi and several Missouri wineries.

In addition, about 50 student volunteers from culinary schools in the region will also assist with food preparation as cooks for the two main hospitality events, thanks to the ACF's local chapter, the Chefs de Cuisine Association of St. Louis.

About Delaware North Companies Sportservice
Delaware North Companies Sportservice is one of the nation's leading food, beverage and retail management companies, providing concessions, gourmet catering and fine dining operations at more than 50 professional sporting venues, entertainment complexes and convention centers across the United States and Canada. Sportservice has served an impressive collection of sporting events and clients, including the World Series, the National Hockey League and Major League Baseball's All-Star Games, Stanley Cup Championships and the Olympic Games.
For more than 90 years, Sportservice has demonstrated that it knows what it takes to effectively develop, operate and manage multi-faceted kitchens, restaurants, suites, fine dining and retail facilities in order to meet the changing demands of today's fans. From introducing new healthy, organic food selections and creative cuisine for twists on the traditional fare, Sportservice continues to innovate and enhance the fan experience.

Chefs prepare hot dogs and other fare at Busch Stadium.

Toasted ravioli is one of the St. Louis specialties that fans at the All-Star Game will enjoy.