NCHL, the leading authority on healthcare leadership, is pleased to honor Dr. Denis Cortese as the recipient of the 2009 National Healthcare Leadership Award for his lasting contributions to healthcare and his commitment to teamwork and mentorship during his 30-year career. Dr. Cortese is widely respected for his outspoken role in the national healthcare reform debate and for advocating for a system that ensures that all patients will receive outstanding and quality care. 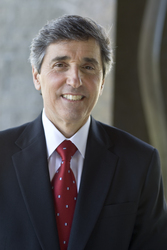 During Dr. Cortese's career he has mirrored the vision of NCHL and used his unique ability to build consensus as he has advocated for a system of evidence-based, affordable, and accessible patient care for all

"Renowned for his commitment to teamwork and mentorship at one of the nation's premier healthcare organizations, Denis Cortese is also applying his leadership to impact the national healthcare agenda by building nationwide consensus for patient-centered change, advocating for a system that ensures that all patients will receive outstanding quality care," NCHL President and CEO Marie E. Sinioris said. "As an extraordinary leader and teacher, his innovative tenure at Mayo Clinic has included cutting edge programs in information technology and medical records, using new discoveries in genomics to customize patient-specific treatment strategies, and emphasis on bedside nursing to improve patient care. And under Dr. Cortese's leadership, Mayo Clinic launched the Health Policy Center, attracting thousands of patients and prominent thought leaders from across the nation to participate in a series of events to develop principles and action steps to guide healthcare reform."

Dr. Cortese will be honored on Wednesday, November 4, 2009 at an award event and recognition dinner at The Millennium Knickerbocker in Chicago that is being held in conjunction with NCHL's Invitational Symposium earlier that day. Dr. Cortese will be presented with an original glass sculpture by Czech-born artist Martin Rosol.

"The role for leadership in U.S. health care is wide open," Cortese said. "Leadership is less about 'you' or 'me' and more about us; what we can accomplish by working together. And much needs to be done to assure quality, affordable healthcare for all patients."

Thomas M. Priselac, president and CEO of Cedars-Sinai Health System and co-chair of the National Healthcare Leadership Award selection committee, praised Dr. Cortese's commitment to improving the nation's health. "During Dr. Cortese's career he has mirrored the vision of NCHL and used his unique ability to build consensus as he has advocated for a system of evidence-based, affordable, and accessible patient care for all," Priselac said. "The selection committee was honored to identify Dr. Cortese as this year's recipient and recognize his role as a forward thinking leader in national healthcare reform."

After serving as a Lieutenant Commander in the Medical Corps of the U.S. Navy, Cortese joined the Mayo Clinic staff in 1976 where he has been a professor of medicine and served as a former director of the Pulmonary Disease subspecialty training program. In 1993 he moved to Mayo Clinic in Jackson, Florida and in 2003 he was named CEO of Mayo Clinic in Rochester, Minnesota.

Dr. Cortese graduated from Temple University Medical School in 1970. He completed his internship and internal medicine residency at the Mayo Graduate School of Medicine. At Mayo Clinic he held a fellowship in thoracic diseases and was a special clinical fellow in bronchoscopy.

Widely published and the recipient of numerous honors and awards, Dr. Cortese is a member of The Institute of Medicine and chair of the Roundtable on Evidence-Based Medicine; Healthcare Leadership Council; Harvard/Kennedy Healthcare Policy Group; FRESH-Thinking; Advisory Board; World Community Grid; Academia Nacional de Medicine (Mexico); and the Royal College of Physicians (London).

Fawn Lopez, publisher of Modern Healthcare, which is co-sponsor of the NCHL National Healthcare Leadership Award, cited Dr. Cortese's many contributions to the field. "He has worked tirelessly and effectively to assert his leadership and influence to help frame the dialogue toward national healthcare reform. He sets a prime example for others to follow."

About National Center for Healthcare Leadership
The National Center for Healthcare Leadership (NCHL) is a not-for-profit organization that is an industry catalyst to assure the availability of accountable and transformational healthcare leadership for the 21st century. Its vision is to optimize the health of the public through leadership and organizational excellence. As the authoritative and objective source on healthcare leadership, NCHL conducts research on global best practices and tests new models for leadership excellence within its Leadership Excellence Networks (LENS). It provides innovative leadership development programs through the NCHL and GE Institute for Transformational Leadership.