In an alchemy of metal, human voices and field recordings from the Tibetan plateau, Richard Rudis (Sonam Dorje) is launching two new CDs whose voices may "alter space, mind and time." He says that listening to these CDs effectively stops the mind's internal dialogue, and awakens and stimulates cellular memory. Rudis, a pioneer in sound healing, has for more than a decade offered group sound experiences known as "Gong Baths," and has taught sacred sound workshops with the Himalayan sacred sound instruments in select locations across the United States. He is now experimenting with the non-traditional marriage of sound and sacred geometry. 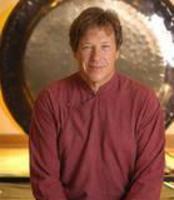 In an alchemy of metal, human voices, sacred geometry and field recordings from the Tibetan plateau, Richard Rudis (Sonam Dorje) is launching two new CDs whose voices may "alter space, mind and time."

Tibetan healing sound instruments are mysterious and singular. Rudis, a student of Buddhism for over a quarter century, has been teaching sacred sound workshops for more than a decade. He invites listeners "to sip at the elixir of Dharmakaya (unwavering truth) and bathe your self in its soothing harmonies." He said that listening effectively stops the mind's internal dialogue, and awakens and stimulates cellular memory into a "natural blissful state" of dynamic trance meditation and a vibrational dance of harmonics.

Track 1 of Pilgrim's Prayer explores the reconstructive healing waves of harmonic sound. Its "choir" of energy will awaken, dismantle and recreate within its metamorphic overtones. Track 2, entitled "Coherence," is a tantric journey into the ancient sacred geometry of the "Sri Yantra." Its complex structures of overtones and harmonics induce natural healing to balance the mind, body and spirit. The final track, "Three Jewels," offers refuge in the natural collaborative energies of spiritual potential, the Dharma and the Bodhisattvas. It promises fundamental shifts in phenomenon space, clarity, vigor, joy and the sense of peace.

Terma-Yana: A Glorious Sound Mandala, another CD offering by Rudis, also features the multi-tonal voice and soothing harmonies of a large earth gong. The Tibetan word "Terma" means hidden treasure, and the word "Yana" means a path, way, or vehicle. This CD may prove to be your pathway to hidden treasure. Both CDs are available at http://satiama.com/store/index.php?target=categories&category_id=184

Gong Baths
For more than a decade, Richard Rudis has offered group sound experiences known as "Gong Baths" and has taught sacred sound workshops with the Himalayan sacred sound instruments in select locations across the US. While he is considered most knowledgeable in this esoteric field and has thousands of followers, much of the population has absolutely no idea what a Gong Bath is or what it can offer them.

Upon entering a large, nearly empty room, gong bathers' eyes are drawn to the 38-inch gong hanging suspended from a frame in the center. This is the planetary earth gong, tuned to the vibrational signature of the Earth as it transits around the sun. For thousands of years, in the Vedic tradition, this has widely been known as the sound of the "Void," "Still Point," or "Aum."

Participants lay out their cushions and blankets in circular patterns on the floor, with head pointed toward the gong. Soon the gentle sounds of sacred singing bowls begin the sound journey, followed by the first, unmistakable sounds of the Earth Gong, as Rudis shepherds participants through an hour-long sound journey like none other. Few can believe an hour has passed as they are bathed in the ancient and sacred sounds.

Afterwards gong bathers share their range of individual experiences, from simply feeling refreshed, experiencing relief of a physical ailment, or even reports of altered consciousness, mind travel and out-of-body experiences.

"We have experienced many of Richard's Gong Baths, and recommend the experience without equivocation," remarked Susan Stuth, co-founder of Satiama, LLC. "It is a marvelous event that simply defies description." In fact, gong bath enthusiasts will often attend a series of gong baths spanning weeks, as allowed by Rudis' workshop schedule.

Consider Rudis' background. An American practitioner of Vajrayana Buddhism, Rudis has studied Eastern philosophy and Buddhism for more than a quarter of a century. He is a long-time pilgrim and guide to sacred sites in Asia. While in Tibet in 1996, Rudis was granted refuge in the Buddha from His Holiness Gyalwa Karmapa. At that time he was given the Tibetan name Sonam Dorje (Meritorious Thunderbolt).

Rudis holds degrees in Fine Arts and English from U.S. universities, and has also studied engineering and architecture. He is a recognized photographic artist, having studied with such notables as Paul Capreonegro, William Parker and Ansel Adams. He has taught "Zen of Photography" at the university level, and has been a guest lecturer at various schools across New England.

In between Gong Bath appearances, Rudis spoke about the marriage of sound healing and sacred geometry. "Everything is energy and has a sound or vibrational signature," Rudis said. "Within the energetic aspects of our universe, we find light, ultrasound, infrared, etc., separated between degrees of frequency."

For more information in his own words, excerpts of Satiama's video interview with Richard Rudis on YouTube can be viewed at http://www.youtube.com/watch?v=0eyZcrqg47A.

For those who cannot attend a gong bath in person, Rudis, under his Buddhist name of Sonam Dorje, has produced several CDs, including Terma Yana and Pilgrim's Prayer, and a Gong Bath DVD of the Gong Bath experience at the third International Sound Healing Conference in Santa Fe, available through http://www.satiama.com. Rudis' gong bath schedule, as well as ancient Buddhist singing bowls and artifacts, can be found at http://www.buddhistartifacts.com