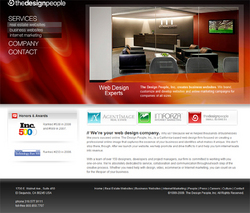 It’s our second consecutive year on this list. It’s a privilege to be acclaimed as one of the fastest-growing companies on the Deloitte 2009 Technology Fast 500.

The Design People today announced that it ranked number 240 on Technology Fast 500™, Deloitte LLP’s ranking of 500 of the fastest growing technology, media, telecommunications, life sciences and clean technology companies in North America. Rankings are based on percentage of fiscal year revenue growth during the five year period from 2004–2008. The Design People grew 559% percent during this period.

The Design People’s CEO, Tiger Bitanga, credits understanding the needs of business owners and website design excellence with the company’s 559% revenue growth over the past five years. He said, "It’s our second consecutive year on this list. It’s a privilege to be acclaimed as one of the fastest-growing companies on the Deloitte 2009 Technology Fast 500."

“Technology Fast 500™ recognizes innovative companies that have broken down barriers to success and defied the odds with their remarkable five-year revenue growth,” said Phil Asmundson, Vice Chairman and U.S. Technology, Media and Telecommunications leader, Deloitte LLP. "We congratulate The Design People on this accomplishment."

Technology Fast 500™ provides a ranking of the fastest growing technology, media, telecommunications, life sciences and clean technology companies in North America. This ranking is compiled from nominations submitted directly to the Technology Fast 500™ website, and public company database research conducted by Deloitte. Technology Fast 500™ award winners for 2009 are selected based on percentage fiscal year revenue growth during the five year period from 2004 to 2008.

About The Design People
The Design People, Inc. creates business websites. We license, customize and develop websites and online marketing campaigns for companies of all sizes. Since 1999, we've grown into a SaaS web development studio with over 7,000 customers and a team of 150 web designers, art directors, project managers and web strategists. We're best known as the people behind Agent Image, our real estate marketing and technology arm. As part of our strategy of developing niche brands, we also recently spun off a full-service Internet marketing division called imFORZA.

About Deloitte
“Deloitte” is the brand under which tens of thousands of dedicated professionals in independent firms throughout the world collaborate to provide audit, consulting, financial advisory, risk management, and tax services to selected clients. These firms are members of Deloitte Touche Tohmatsu (DTT), a Swiss Verein. Each member firm provides services in a particular geographic area and is subject to the laws and professional regulations of the particular country or countries in which it operates. DTT helps coordinate the activities of the member firms but does not itself provide services to clients. DTT and the member firms are separate and distinct legal entities, which cannot obligate the other entities. DTT and each DTT member firm are only liable for their own acts or omissions, and not those of each other.

Each of the member firms operates under the names “Deloitte,” “Deloitte & Touche,” “Deloitte Touche Tohmatsu,” or other related names. Each DTT member firm is structured differently in accordance with national laws, regulations, customary practice, and other factors, and may secure the provision of professional services in their territories through subsidiaries, affiliates and/or other entities.