The BIGGEST display of AIDS Memorial Panel Quilts in Southern California be on display as part of HOLLYWOOD REMEMBERS, a multimedia musical event ON SUNDAY, NOVEMBER 29, 2009 at Hollywood Lutheran Church. The centerpiece for the event will be the world premiere of an original musical Red Ribbon, written especially for that evening by Joe Lawrence and directed by Jerry Craig. Money raised by this year’s event will benefit Women Alive, a community based organization providing assistance to women living with HIV. The reception for the evening will include an art show by young people affected by HIV/AIDS, displaying original works of art. Admission for the event is free. 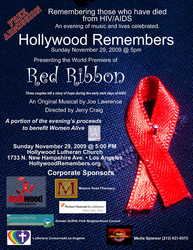 The evening will be an amazing celebration of music and art honoring those impacted by HIV/AIDS.

On Sunday November 29, 2009 at 5 pm the Hollywood Community will gather at Hollywood Lutheran Church, 1733 N. New Hampshire Ave., Hollywood, CA to commemorate World AIDS Day with a multimedia musical event. The gathering is being organized and sponsored by Hollywood Remembers, a non profit community volunteer corporation. Recognition will be given to the progress that has been made in prolonging the lives of those living with HIV, as well as the unsung heroes of caregivers, doctors, nurses, family members and others.

The centerpiece for the evening will be the performance of an original musical Red Ribbon, written especially for the event by Joe Lawrence and directed by Jerry Craig. Red Ribbon is an original rock & blues musical promoting AIDS awareness. It tells the story of hope during the early dark days of the disease. Three couples face this tragedy, learning about themselves and each other, building to the symbol of solidarity, the Red Ribbon.

Panels from the AIDS Memorial Quilt will also be on display. During the evening, guests will be invited to write names of their loved ones who have died from HIV/AIDS on small cards which then will be collected, mounted on a large banner, and raised above the proceeding. Money raised by this year’s event will go to benefit Women Alive, a community based organization supporting women living with HIV. The reception for the evening will include an art show by young people affected by HIV/AIDS, displaying original works of art.

For further information, you can go to http://www.hollywoodremembers.org or email rickeisenlord@mac.com.. To view a video report by Chanel 11 on You Tube about last year’s event go to: http://www.youtube.com/watch?v=3XNUal6_yxA

About Hollywood Remembers:
Hollywood Remembers is a 501(c)3 Non-Profit Corporation whose purpose is to host a yearly event in conjunction with World AIDS Day honoring those who have died from HIV/AIDS within the Hollywood Community and at large and celebrating those living with the disease with special recognition given to minority communities.