Festivus in a Box™ Introduced for Holiday Season

Milwaukee based manufacturer of full-size Festivus Poles now produces scaled down version boxed with everything needed for a "Festivus for the Rest of Us." 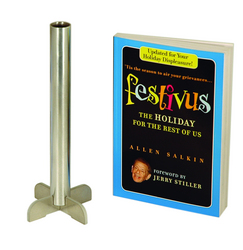 Just in time for the upcoming holiday season, The Wagner Companies has announced the availability of their latest product - "Festivus in a Box™."

"Festivus in a Box" includes a 7/8 inch diameter by 8-1/2 inch long aluminum, mini Festivus Pole with collapsible base; six "Human Fund" Festivus post cards; an "Airing of Grievances" form, and a copy of Allen Salkin's book, "Festivus, The Holiday for the Rest of Us".

"While the 6 foot Festivus Pole remains very popular, we found that many people didn't have room for our larger Festivus Pole and were interested in a smaller version for use in their office or as a center piece at their holiday dinner", reports Wagner spokesman Tony Leto. "'Festivus in a Box' provides a simple solution while providing all the accoutrements and information someone would need to celebrate the 'holiday for the rest of us'."

While Festivus boasts no commercialism, no frills and no tinsel, The Wagner Companies cannot deny the popularity of its Festivus Poles. The company has shipped more than 5,000 Festivus Poles since first making them available.

The Festivus Pole is the centerpiece of the Festivus celebration made famous in a December 1997 episode of the television program “Seinfeld” titled “The Strike”. In that episode, the fictional Frank Costanza, played by Jerry Stiller, tells of how he invented the holiday when his children were young and he found himself in a department store tug-of-war with another Christmas shopper for a doll. “I realized there had to be a better way,” Frank recounts.

According to Mr. Costanza, the Festivus tradition begins with a bare aluminum pole, which Frank praises for its "very high strength-to-weight ratio." The unadorned aluminum pole is displayed in opposition to the commercialization of highly decorated Christmas trees, and because the holiday's creator, Frank Costanza, "find[s] tinsel distracting."

Tony Leto explains how he came upon the idea for manufacturing Festivus Poles in Milwaukee.

“Having grown up in New York and gone to college with Jerry Seinfeld, I was always a big fan of the show. In December, 2004, I read an article in the New York Times by Allen Salkin that touched on how the fictional Festivus was starting to take hold in various parts of the country. The specifications noted for Festivus Poles were certainly something we could meet so I registered the domain name ‘festivuspoles.com’ for possible use later. Then, in October 2005, I happened across a copy of Allen’s newly published ‘Festivus, The Holiday for the Rest of Us’. The timing seemed right and we went into production. Milwaukee seemed like the perfect manufacturing location for Festivus Poles since it is a city that shares the Festivus Pole’s ‘very high strength-to-weight ratio’. It has also been a fun project for us since it is a step away from the architectural and industrial metal products we would typically produce.”

In addition to Festivus Poles, the celebration includes two more components: “The Airing of Grievances” and “The Feats of Strength.”

“The Airing of Grievances” takes place at the Festivus dinner. Each participant tells friends and family all of the instances where they disappointed him or her that year.

In addition, Festivus Poles have returned to Queens and are also available at the Royal Garden Florist, 99-21 Queens Boulevard, Rego Park. Their phone number is 718-459-6333.

The Wagner Companies has been in the metal business since 1850 as a manufacturer of handrail fittings and metal products for architectural and industrial applications.

The Wagner Companies is made up of R & B Wagner, Inc. and The J. G. Braun Company. The main product lines include: Architectural Catalog, Architectural Custom and Industrial Original Equipment Manufacturer (OEM) products.