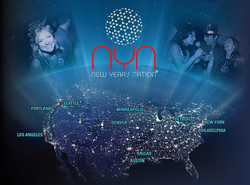 “NYN-TV will capture the best that our cities have to offer and allow guests to see what’s happening everywhere... taking New Year’s Eve to a whole new level, and offering our guests and at-home viewers a truly interactive experience."

Come on people, make some noise! Join the party that connects the nation! New Year’s Nation (NYN), a high-end events and promotions company that leverages technology to create simultaneous social experiences for young professionals in major markets around the country, today announced its 4th annual nationwide New Year's Eve party that will span 10 cities and four time zones with its LIVE online simulcast at http://www.newyearsnation.com. NYN is the only event of its kind, connecting thousands of people in multiple cities on the biggest night of the year. This year more than 10,000 guests in 10 cities will join the NYN celebration as viewers across America and around the world tune in to this hot ticket party. A must-be-seen New Year’s Eve extravaganza!

As a special tribute to Brittany Murphy, NYN also plans to play a medley of songs from the late actress’ movie soundtracks – to be presented from the New York venue, Doubletree Guest Suites-Times Square, through top DJ Scott Sheehy aka Spin Diesel, and streamed LIVE across the nation.

As states Jann Yogman, President and Founder of NYN: “2009 has been a rough year for a lot of people. I think we all need to take a deep breath, have a drink and press the reset button on our lives. New Year’s Eve gives us that opportunity. And our guests deserve to celebrate without the hassles that people normally associate with the night. We pride ourselves on doing New Year’s Eve right.”

Celebrity guests are also expected to make surprise appearances from coast-to-coast. Last year’s NYN made headlines as Travis Barker and the now late DJ AM reunited to perform at the Los Angeles leg of the event. As AM had said at the time, "I'm glad our first show back is here in LA on New Year’s Eve. I've never been 10 places at once before."

This year at NYN-LA will be KROQ radio legend Rodney Bingenheimer on the Roq who will be featuring music from the 80s as part of the entertainment – to be hosted at the Montalban Theatre, a landmark known for its rich history, prime Hollywood location, and state-of-the-art sound, lights and multi-screen digital projection. Tommy Tutone ("Jenny/867-5309"), will also be making a special guest appearance at the LA event.

With sponsors lining up to participate in NYN’s big annual event, it’s easy to see why companies have swung into the party mix. The world is invited to be a part of history (at midnight CST, 10:00pm/PST, 11:00pm/MST, 1:00am/EST) as NYN together with Colgate will attempt to break the Guinness Book of World Records for the most people kissing simultaneously in multiple locations… a New Year’s “Midnight Kiss” challenge. Colgate® Wisp® has partnered with NYN as the official sponsor of their New Year’s Eve “Colgate® Wisp® Midnight Kiss” (Wisp Before You Kiss).

Blue Moon is another NYN proud sponsor. Fun trivia: Did you know New Year's Eve is technically a blue moon, which means it's the second full moon in the same month? For the occasion, Blue Moon has brewed a special Grand Cru, served in 750ml bottles, and NYN will be offering a Blue Moon Grand Cru toast at Midnight.

Also in the NYN party house, coming direct from New York, will be a LIVE Midnight performance of a special "Auld Lang Syne" remix, "Bottles Pop" (an NYN exclusive), to be streamed to every NYN venue and the Internet.

Don’t miss the big New Year’s Eve 10-city party celebration as NYN will be streamed LIVE via Live Stream (livestream.com), a Content Delivery Network (CDN), on the Internet at http://www.newyearsnation.com. The main channel on NYN’s custom-built Livestream player will feature highlights from all 10 cities, while10 city-specific channels showcase the action in each market. By leveraging technology to enhance the nightlife experience Yogman has clearly not only rewritten the book on throwing the most outrageous party, he has essentially turned the party business into a new artform.

Guests at the NYN parties in New York, Los Angeles, Dallas, Seattle, Portland, Denver, Philadelphia, Detroit, Austin and Minneapolis will be able to enjoy the various LIVE entertainment specifically featured in the individual cities (go to http://www.newyearsnation.com for further details). Online viewers will be able to watch the main broadcast, featuring coverage from all 10 cities, or they can click on the city of their choice to view a particular feed. NYN’s LIVE broadcast will make it possible for partygoers in multiple time zones, including viewers at home, to celebrate the New Year every time the clock strikes Midnight! Imagine ‘counting down’ four times!

“NYN-TV will capture the best that our cities have to offer and allow guests to see what’s happening everywhere,” adds Yogman, whose concept for the nationwide, simultaneous party was formally launched in 2006 (when he hosted the first NYN New Year’s Eve party in five U.S. cities). Today, NYN’s President and Founder is proud to see his 2006 party start-up has flourished into a 10-city ‘real time’ linkable major event.

Partygoers will find NYN has raised the bar on every detail – an experience that is nothing short of exceptional. Its commitment to creating an unforgettable, entertaining and hassle-free evening sets NYN apart from all other New Year's Eve parties. This major nationwide event will feature:

There’s only one place to be this New Year’s Eve. NYN is quickly becoming the brand name that people associate with this time of year. Is Yogman today’s rock star of the party business? Or is his NYN the ‘next generation’s’ answer to Dick Clark’s ball drop? "New Year’s Nation takes New Year’s Eve to a whole new level and offers our guests and at-home viewers a truly interactive experience,” invites Yogman. “This is Ball Drop 2.0.” Join the party and draw your own conclusions!

ABOUT NEW YEAR’S NATION
NYN was launched in 2006 when entrepreneur and events promoter Jann Yogman conceived the idea of creating the first nationwide New Year’s Eve party that would use technology to connect young professionals and enable them to interact and share in the same social experience. Based on the success of the first event, NYN has expanded its party every year – with this year’s simulcast to feature more than 10,000 guests in 10 cities and four time zones across the country, with thousands more participating online. NYN’s current focus is on continuing to build out from its national New Year’s Eve Party platform, with an eye toward expanding to other events in the future. While the possibilities for these experiences are endless, everything that NYN is involved with will reflect the ultimate ‘NYN Experience’ – exemplary brand recognition that is synonymous with optimum quality and customer experience. NYN continues its domestic expansion this year and has long-range plans to take its party event internationally.