Be a Phenomenon: New DVD Teaches How to Become a Mentalist

Ask a kid what he wanted to be: A mentalist, a magician or a mindreader will be his answer. 2009 TV shows were full of the ancient acts that were so popular in the biblical era. All these supernatural shows have been making it big in the industry as the big networks (CBS, NBC, A&E and others) are working hard on finding the new 'Phenomenon', new 'Mentalist' or new 'MindFreak'. Whether you wish to be in a magic reality competition or a drama mentalist show - the new DVD can offer the first step 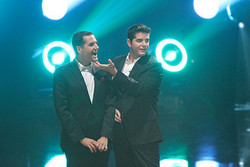 Ross Mathews (aka The Intern), from The Tonight Show with Jay Leno, is having his mind read by mindreader and mentalist Ehud Segev (aka The Mentalizer)

What's the best way to know what your viewers want to see? You turn into a mindreader!

Ask a kid what he wanted to be: A mentalist, a magician or a mindreader will be his answer. 2009 TV shows were full of the ancient acts that were so popular in the biblical era. All these supernatural shows have been making it big in the industry as the big networks (CBS, NBC, A&E and others) are working hard on finding the new 'Phenomenon', new 'Mentalist' or new 'MindFreak'.

Whether you wish to be in a magic reality competition or a drama mentalist show - the new DVD (produced by "Made in Here" and features renowned mentalist Ehud Segev), will offer the first step.

How Mentalism and Magic Became Such a Hot Trend

"In the beginning there was nothing but drama on TV", says MADE-IN-HERE's associate producer Jeff Derrick who tried to explain why they decided to release the new DVD now. "But then the documentaries started their metamorphosis into a new trend: Reality. Reality TV shows changed the way the executives were thinking. Every network was too busy trying to figure out what will be the new reality shtick and how to get more rating. When they realized that there is no specific algorithm that can guarantee a specific success to a specific TV show they understood that they need a miracle. And if a miracle wasn't available then real magic can do the work! And what's the best way to know what your viewers want to see? You turn into a mindreader! By reading the minds of your viewers you can tell what the next trend will be. And what's better then doing a mindreaders TV contest? or a magician special to add some magic to the network rating?"

"When I arrived to Hollywood to start working on NBCs Phenomenon I had a chance to work with mentalist and magician Banachek who received critical acclaim for his work with great magicians such as Criss Angel. We were laughing at how mentalism became such a successful form of entertainment after it was neglected for so many years. A year ago nobody knew what a mentalist does - but now everybody wants to become one!"

"Banachek is a top brand in Mentalism and Magic", Segev continues, "and I think that everybody loves him. I never met a mentalist or magician who doubt his great skills and persona. When it comes to magic shows, or illusions magic such as the ones performed in the magic TV show MindFreak - he always pushed himself to the edge, providing to the producers the most advanced, thought provoking, magic tricks and magic illusions. I loved working with him on the mentalist show Phenomenon and we discussed the aspects of magic and mentalism on TV. We agreed that producers were afraid to produce magic shows on TV because the lack of trust. Why should the audience believe what he sees in the small screen if he sees all the special effect in motion pictures? The producers were afraid to be attacked as 'camera tricks' producers. But once reality TV became such a hot trend, it opened the door for this type of shows as the viewers tend to believe that what they see in reality shows is reality."

Magic and Mentalism Become Reality
When it comes to making the best magic trick CBS did a pretty good job with the mentalist Simon. This mentalist series on TV broke rating records and won critical awards as a Drama mentalist TV show which is very different than the approach NBC was trying to take with 'Phenomenon'.

The other networks believed that reality is truly taking over the entertainment business which was probably a wrong conclusion. Reality magic shows and mentalism magic shows tried to find the best "magic trick" or the new approach of illusions magic: "mentalism tricks", but failed. The reason was simple: people didn't want to watch mentalists fighting each other or see close up magician or a corporate magician that are trying to show their skills in order to win over the 'judge' attention or the audience's votes.

The viewers were looking to see how mentalism or magic goes into action in real life. Yes, they have seen a corporate magician making a handkerchief disappear and a close up magician making a coin appear from midair. They had enough card tricks that they can learn themselves by going to any 'free magic trick' video on youtube.
They wanted a combination between the reality aspect of mentalism and magic. They wanted to see a brand new mentalist or mindreader TV show.

And that's when CBS won the jackpot. Their new show "The Mentalist", that tells the story of an independent consultant for the California Bureao of Investigation, named Patrick Jane (Simon Baker), who uses his mindreading techniques in real life to solve crimes. And how do you know a TV show becomes a huge hit? Because now everyone wants to download "The Mentalist" on the Internet. They want to watch the mentalist free, and right away! And after they download the mentalist TV episodes to their desktops they now want to learn how to become a mentalist themselves. That's what happens when you crack the system and nail a hit TV show: you create a world-wide buzz and everyone dreams of becoming your shows' hero.

The Mentalist Secrets Revealed
"There is one big change that I understood immediately", says mind reader Segev, "and it is the change of the way people will consume magic and mentalism in 2010. All mentalists or magicians must understand that magic and mentalism will have a new market. Our profits will no longer come solely from corporate events or theatrical productions we will perform in, but also in the education level of the field. People went from total ignorance to the field of Mentalism into wanting to become mentalists."

Segev was to one to come up with the concept of the new "Be a phenomenon" DVD. By doing this he is hoping to interact with the audience of the networks. Segev also created a new website, called "The Mentalizer" which offers mentalist download videos, mentalist streaming clips and mentalist wiki information.

"I know that everyone who wants to be a mentalist downloads mentalist secrets from the Internet. So in order to make it easier on them I made a mentalist streaming section in my website who teaches some of my favorite mentalist tricks. I also put my off-Broadway production of "Anomal - a story of a supernatural boy" on my site. Now Anomals' mentalist 10 parts are available for people to watch from home - free of charge. This way if you want to watch the mentalist TV experience or theatre experiences, you can do so from your living room."