Investment Rarities: Are “Short Contracts” Manipulating the Price of Silver?

Are the concentrated holdings of silver “short contracts” on the COMEX commodities exchange artificially depressing the price of the precious metal? Yes, according to noted silver analyst, Theodore Butler, in a newsletter released by Investment Rarities, Inc., a Minneapolis-based investment firm. 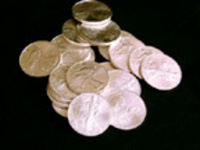 Is Silver the New Gold?

“Short contracts on COMEX have caused silver to be undervalued compared to gold,” says Investment Rarities, Inc. president, Jim Cook. “If and when this short position is closed out, the price of silver could surpass its previous high of $49 an ounce.”

Are the concentrated holdings of silver “short contracts” on the COMEX commodities exchange artificially depressing the price of the precious metal? Yes, according to noted silver analyst, Theodore Butler, in a newsletter released by Investment Rarities, Inc., a Minneapolis-based investment firm.

Butler bases his findings on information released by the Commodity Futures Trading Commission (CFTC), including regularly published statistical reports, as well as recent reports issued by the U.S. Treasury Department’s Office of the Comptroller of the Currency (OCC). The data indicates the largest single owner of silver short contracts is New York investment bank, J.P. Morgan, which holds approximately 40% of silver’s short position on the COMEX commodities exchange, or 200 million ounces. Butler contends this short position is contributing to silver’s below market price.

“Short contracts on COMEX have caused silver to be undervalued compared to gold,” says IRI president, Jim Cook. “If and when this short position is closed out, we believe the price of silver could surpass its previous high of $49 an ounce.” (The current price of silver is around $18 per ounce.)

In the case of J.P.Morgan, reconciling the short position could cost the investment bank over $10 billion if they have to buy back the short contracts. Says Butler, “This could send silver prices skyrocketing.” Further complicating the J.P. Morgan’s short predicament, Butler argues, is the fact that “there are not 200 million ounces of silver freely available on the planet.” Industrial demand for silver has been outstripping mining supply for the past 20 years, driving the above ground supply to historically low levels, according to the commodities research firm CPM Group.

“To be fair,” Butler notes, “J.P. Morgan inherited the problem from Bear Stearns, after the U.S. government forced them (J.P. Morgan) to absorb the now defunct investment bank (Bear Stearns) in early 2008. And now they are trapped in a no win situation that, potentially, violates U.S. commodity laws prohibiting “market manipulation.”

IRI’s Jim Cook adds, “Thirty years ago the Hunt brothers influenced the silver market by buying silver futures, driving the price up to $50 an ounce. Similar circumstances are at play today, but on the short side. I expect fortunes could be made in silver as Ted Butler’s analysis reaches mainstream investors.”

Butler’s analysis of silver short contracts on the COMEX Commodities Exchange can be found at http://www.investmentrarities.com/ted_butler_comentary12-21-09.shtml.

DEFINITIONS OF A SHORT SILVER CONTRACT: Selling a stock or commodity “short” is a complicated process of profiting from a decline in its market price. In a short sale a buyer bets against a stock by “borrowing” shares from the entity holding them. The buyer then "sells" the shares immediately and at some future date, contracts to buy back the same amount of shares (called “covering your short position”) and return them, hopefully at a much lower price, and thus a profit.

ABOUT THEODORE BUTLER: Theodore Butler is the chief analyst at Butler Research, LLC. Originally from New York and now residing in Florida, Butler has over 35 years experience in commodities and futures. Butler has served as a consultant and analyst to Investment Rarities, Inc. for 10 years. Website: http://www.butlerresearch.com .

ABOUT INVESTMENT RARITIES, INC.: Investment Rarities Incorporated (IRI) has been helping clients preserve wealth with gold and silver for over 35 years. The company has delivered over two billion dollars in coins and bullion to their customers. For more information about silver as an investment, visit Investment Rarities, Inc. at http://www.investmentrarities.com. Call toll-free at 1-800-328-1860.