The Good Listeners Hit Song, Eighty Steps Away, is iTunes’ Discovery Download of the Week

From January 19 – 25, 2010 music lovers can download Eighty Steps Away free of charge, exclusively on iTunes 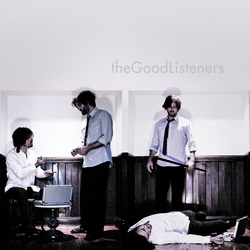 The Good Listeners are debuting their new hit album this week, http://www.thegoodlisteners.com Don't Quit Your Daydream, in an exclusive iTunes digital-only release by Three Fingers Records that is already attracting rave reviews from listeners and music industry insiders. The album’s lead single, “Eighty Steps Away,” is available starting today as a free iTunes “Discovery Download.”

Produced by John Loar in association with Adrian Grenier’s Reckless Productions, the group will be releasing a musical rock-u-mentary in conjunction with the album’s release, both available on iTunes starting today, January 19, 2010.

The Good Listeners, named for the band’s ability to listen to music and hear all of its unique hidden and subtle sounds, recorded and filmed both the album and rock-u-mentary Don’t Quit Your Daydream while taking a 31-day cross-country road trip in an RV. Not wanting to give up the dream of being rock stars, the 40-year-old friends pack up their lives, leave their day jobs behind, and risk it all to make the album of their dreams come to life. The group stops in eight different locations and collaborates with small town musicians who like band members, Clark Stiles and Nathan Khyber, love creating music.

“We call our style cinematic pop,” says Clark Stiles, who together with Nathan Khyber are the Good Listeners. “Each song on this album had a different collaborator with a different musical background. Don’t Quit Your Daydream is the result of a great road trip and an amazing musical adventure.”

Stiles and Khyber got their start in rock-and-roll back in the 90’s when they were a part of the up and coming musical sensation, Absinthe. The duo are no strangers to unusual ways of working and remote recording locations, having completed their 2005 debut album, Ojai, after recording an impressive 10 songs in 10 days in a makeshift home recording studio. And in a setting reminiscent of the movie, “The Shining, “ their 2007 album, Crane Point Lodge, was recorded in a 14-room country lodge nestled deep in New York State’s Adirondack Mountains.

For more information and tour dates, please visit http://www.thegoodlisteners.com. Download your copy of the album and rock-u-mentary Don’t Quit Your Daydream at http://www.itunes.com.