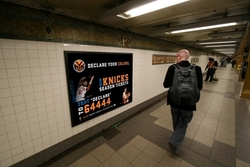 Utilizing txt2go the Knicks were able to access real-time performance data that could help measure how various promotions performed and allowed them to make adjustments on an ongoing basis. Over the four week mobile marketing campaign, more than 3,300 consumers texted in. This provided the Knicks with a significant base of individuals to test promotions prior to finalizing general market strategies for the season, and helped increase the team’s mobile fan base.

“txt2go was a perfect fit,” said Howard Jacobs, senior vice president of marketing and ticket sales for Madison Square Garden Sports. “The Knicks ‘Declare’ marketing campaign is focused on connecting the fans, the city and the team, and establishing a two-way dialogue with our fans. Using txt2go, we were able to incorporate sweepstakes, digital couponing and customer loyalty elements into our campaign, and gain valuable insight into our fan base. CBS Outdoor’s team helped guide us in developing an effective strategy incorporating txt2go into our campaign, and the results exceeded our expectations.”

“Our text messaging component provided the Knicks with real-time performance data that allowed them to adjust their marketing strategy during the campaign; and to adjust future campaigns to reach their target audience more effectively,” said David Lane, vice president of Digital Media, CBS Outdoor. “We design our mobile strategies around our client’s campaign objectives, and the NY subway audience provided the Knicks with an excellent sampling to collect important data that will shape future campaigns. We also ensured that they were able to use txt2go to effectively communicate their ongoing promotions to their list of participants after their media campaign had ended. ”

CBS Outdoor’s txt2go mobile advertising is a turnkey platform whereby an advertiser of any size can add a text messaging element to their overall marketing strategy. Designed to enhance not only the outdoor advertising component, txt2go also should be used across the advertiser’s entire media strategy. In addition to simplifying the process, CBS Outdoor txt2go is very affordable with packages starting at $225. Clients will be able to see the real time performance of their mobile marketing campaign on the CBS Outdoor Mobile Web site. The txt2go team also ensures that the advertiser effectively communicates with their list of consumers who participated in their text program after their media campaign had ended.

About CBS Outdoor
CBS Outdoor, a division of CBS Corporation (NYSE: CBS.A and CBS), is one of the largest out-of-home media companies in the Americas (United States, Canada, Mexico and South America), and has a major presence across Europe in the United Kingdom, Ireland, France, Italy, the Netherlands, Spain and China. With both traditional outdoor and transit properties, this division gives advertisers both breadth of coverage across vast geographies and depth of coverage, providing multiple media opportunities in key markets. For more information, visit https://www.cbsoutdoor.com.