Bruce A. Roth, founder of Daisy Alliance and author of "No Time To Kill," attends a three-day event titled “Atlanta Consultation III: Fulfilling the NPT.” The Middle Powers Initiative hosted the event at the Carter Center in Atlanta, Ga. The goal of the meeting, is to coordinate strategies to achieve success at the upcoming NPT Review Conference in May 2010. 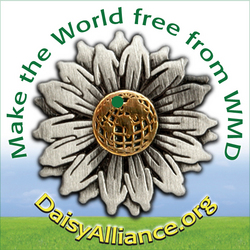 Bruce A. Roth, founder of Daisy Alliance and author of "No Time To Kill," and Holly Lindamood, Program Director, Nuclear Nonproliferation and Disarmament, attend a three-day conference hosted by the Middle Powers Initiative (MPI) at the Carter Center in Atlanta. The conference, titled “Atlanta Consultation III: Fulfilling the NPT,” brings together around eighty diplomats, parliamentarians, and representatives of nongovernmental organizations from about thirty countries. The goal of the meeting is to coordinate strategies to achieve success at the upcoming NPT Review Conference in May 2010.

The conference featured a series of panels with the goal of developing global strategies towards fulfilling the NPT and advancing global disarmament. The opening plenary, “Compass Point of Elimination,” included speeches by President Jimmy Carter, Jonathan Granoff, President of the Global Security Institute, the Honorable Douglas Roche, OC, Chairman Emeritus of the MPI, and H.E. Sergio Duarte, UN High Representative of Disarmament Affairs. Additional panels throughout the conference focused on President Obama’s vision of achieving the global elimination of nuclear weapons, advancing international cooperation in the nuclear nonproliferation and disarmament arena, and strategies for the NPT Review Conference.

Afternoon breakout sessions focused on more specific challenges to the upcoming review conference, and included panels on “Advancing the CTBT,” “The Middle East Resolution,” and “Security Doctrines and Extended Deterrence.” Dr. Nancy Gallagher, Associate Director for Research at the Center for International and Security Studies, presented a keynote speech detailing the tradeoffs between nuclear disarmament and international security, and provided a view of the bigger picture. She suggests that a singular focus on nuclear disarmament to the exclusion of global security is doomed to fail, because the former cannot occur without the latter.

The upcoming NPT review conference is particularly crucial to the viability of the nonproliferation regime, which is at a precipice due to the failure of states parties to even agree on an agenda at the 2005 Review Conference. Preparatory meetings such as the conferences organized by the MPI are a vital step in coordinating policy and ensuring success at the 2010 Review Conference.

ABOUT DAISY ALLIANCE—Daisy Alliance was founded by Bruce A. Roth in 2006 as a global grassroots, non-partisan education and advocacy peace organization organization which promotes the non-proliferation, disarmament, and the elimination of nuclear weapons, biological weapons, and chemical weapons—all types of Weapons of Mass Destruction, or WMDs. Daisy Alliance raises funds from the sale of its products: lapel pins and the book "No Time To Kill," in order to educate the public in all walks of life about the devastation WMDs are capable of inflicting and the threat that WMDs pose to civilization. "No Time To Kill" is a holistic guide to WMDs, terrorism, and genocide, written for the layperson. More than just discussing these problems, it presents a reasonable solution to make the planet safer—an approach never tried before. The Daisy Alliance lapel pin symbolizes the globe at its center, and its petals represent people of the world joined together. The inspiration for the name Daisy Alliance came from the 1964 Lyndon B. Johnson presidential television campaign ad.