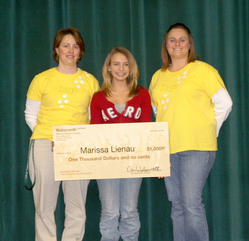 I was just sitting in the classroom when my teacher said, 'So I hear you won the Walsworth Sweepstakes,'

Michigan middle school student Marissa Lienau got an early start toward funding her future college education when Walsworth Publishing Company announced she was the second of three $1,000 winners in its Student Scholarship Sweepstakes.

Lienau is an 8th grader at Seneca Middle School in Macomb, Mich. Representatives from Walsworth presented her with a $1,000 oversized check earlier this month during a lunch-time ceremony at school.

Lienau and her parents entered Walsworth's Sweepstakes last fall, when they saw promos for the contest on the Walsworth website while ordering their yearbook. Lienau did not find out she was the second Walsworth winner from her teachers and parents until a surprise announcement in her social studies class.

"I was just sitting in the classroom when my teacher said, 'So I hear you won the Walsworth Sweepstakes,'" said Lienau. "I was really surprised."

According to Debora Lienau, Marissa's mother, her daughter is a fun, studious kid who couldn't be more thrilled to receive the early jump-start on financing her education.

"She has really always loved school," said Debora Lienau. "She's pretty much been an A student. The one time she brought home a B, she immediately joked around that she needed to bring that up."

Now the $1,000 Sweepstakes winnings from Walsworth already have Marissa looking to the future.

"It's gotten her excited, and thinking about college already," said Debora Lienau. "She has said she wants to maybe be a pharmacist, or a pediatrician, so she's got a long road ahead."

Students and parents were able to register for three drawings by visiting yearbookforever.com/win through Nov. 30. The winner of the first drawing was Brendan Keady from Fenwick High School in Oak Park, Ill. The winner of the third Sweepstakes drawing will be announced within the next few weeks.

The Scholarship Sweepstakes has been part of Walsworth's yearlong effort to help schools show their audience just how special the yearbook is. Schools were given access to marketing materials promoting the Sweepstakes, including posters, fliers, web ads and other materials, all with the theme of capturing a snapshot of high school life and asking students if they will remember it "10 years from today."