In a country where only 9% of the population is bilingual and fewer than 8% of college students enroll in foreign language courses, business leaders took action to change the future for their companies and the next generation. 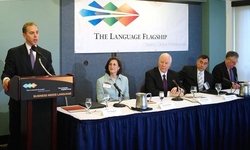 There has been a shift in paradigms in the world. Unfortunately, the United States is not well prepared for a 21st–century world in which economic competitiveness, not military power, is central to our security and well-being.

The press event, Business Needs Language, brought together business leaders, education leaders, policy-makers and the press to discuss the business community's need for global language skills, the importance of having the next generation of professionals be proficient in critical/non-traditional language, and the need for a national Call to Action to meet these needs.

“Global markets have changed from a generation ago. We must change or we will pay the price,” said Paul Ruppert, CEO of Global Point View, a mobile communications consulting firm in Washington, D.C. Ruppert, chairing the speakers panel, endorsed the arrival of a new report “What Business Wants: Language Needs in the 21st Century” produced by The Language Flagship, an initiative of the National Security Education Program at the U.S. Department of Defense.

Donna Kimmel, the senior vice president of global human resources for Sensata Technologies, stated “Global awareness is critical to our success. In our company, it is not unusual for one of our engineers in the Netherlands be the lead on a project developed by the U.S. team for a product that will be manufactured in Malaysia. It is vital to us to attract business and engineering professionals with a global mindset, and a global mindset comes from stepping into a new area and learning a new language.”

Michael Byrnes, senior advisor of Yuan Associates, likened the criticality of the current business needs to the Cold War Era. “There has been a shift in paradigms in the world. Unfortunately, the United States is not well prepared for a 21st–century world in which economic competitiveness, not military power, is central to our security and well-being.” Byrnes is a former CEO of Tyco China and a retired U.S. Army major general.

William D. Zollars, chairman and CEO of YRC Worldwide, said, “If we don’t get more involved in becoming global companies, we won’t be a global power. It takes more than learning foreign language. Language shows effort but cultural understanding is the road-map to success,” he added.

Ohio Senator Voinovich’s annual report for the 110th Congress stated that “without foreign language skills and cultural knowledge, businesses face greater difficulties in exporting to overseas markets and competing against foreign-owned firms. U.S. business needs language, and business leaders are taking action to discuss their needs for the next generation of professionals.”

Advanced language education and cultural understanding is what The Flagship Language Program provides. As a partnership between the federal government, academic, and business communities, The Language Flagship graduates college students who have achieved a superior level of fluency in one of many languages critical to U.S. competitiveness and security. The program shapes students into global professionals, and provides intensive overseas learning and working experiences.

The report “What Business Wants: Language Needs in the 21st Century” is the result of a systematic effort to assess, document and reveal the business community’s needs for language and global skills. The result of three years work engaging over 100 business leaders in identifying the role and value of language and cultural skills to their businesses bottom line. The report is available at: http://www.thelanguageflagship.org/images/documents/what_business_wants_report_final_7_09.pdf.

For more information on The Language Flagship Program visit the website http://www.TheLanguageFlagship.org.