Study Reveals Californians Must Increase Earthquake Preparedness; Less Than 20 Percent Have Prepared Their Homes; Only 40 Percent Have Sufficient Water 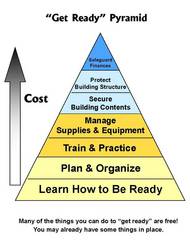 “The recent earthquakes in Chile and Haiti are unwelcome reminders of the devastating impact earthquakes can have on people and communities,”

Although state and local public safety and emergency management agencies are better prepared than ever before, California residents have focused on easy preparedness activities such as collecting supplies and making back-up copies of important documents but they have not done more difficult and expensive activities such as securing the contents of their home or purchasing earthquake insurance, according to the survey.

Key findings of the survey were:

The California Earthquake Preparedness Survey was conducted by the UCLA School of Public Health for the State of California on behalf of California Emergency Management Agency, California Seismic Safety Commission and CaliforniaVolunteers to learn how prepared California households are for earthquakes and where they get their information about preparedness and mitigation.

“The recent earthquakes in Chile and Haiti are unwelcome reminders of the devastating impact earthquakes can have on people and communities,” said Secretary Matthew Bettenhausen of the California Emergency Management Agency. “It calls attention to the need for Californians to do even more to prepare for the big one. This study confirms that Californians need constant reminders and a steady stream of earthquake preparedness information to motive people to act. We continue to urge Californians to prepare now.”

“It is important for Californians to prepare for all types of disasters by having a plan and being ready to take care of ourselves, our families and our communities,” said Karen Baker, Secretary of Service and Volunteering. “Personal preparedness allows disaster workers to focus on critical areas to protect our state. Everyone can take steps to prepare.”

Observations from the earthquakes in Chile and Haiti reinforce the importance of being self-sufficient immediately following a disaster such as stockpiling food, water and supplies; training and practicing skills that are critical during disasters; and protecting the structures of buildings.

In absence of an actual disaster, “information received” and “information observed” are most likely to increase investment in earthquake preparedness and mitigation. The amount of information people hear, read and see determines whether they prepare. Other factors, including the increased probability of a future event, risk of future event and demographics like income, education and age, which may constrain what people can afford, have little effect on motivating people to prepare.

About California Emergency Management Agency
California Emergency Management Agency (Cal EMA) is responsible for the coordination of overall state agency response to major disasters in support of local government. The Agency is responsible for assuring the state’s readiness to respond to and recover from all hazards - natural, manmade, war-caused emergencies and disasters - and for assisting local governments in their emergency preparedness, response, recovery, and hazard mitigation efforts. For more information, please visit http://www.CalEMA.ca.gov.