Genesys, LLC Announces an Historic Breakthrough in Energy Technology; the Efficient, Economical Production of Hydrogen From Any Source of Water

Genesys, LLC announces an historic breakthrough in energy technology with the granting of a patent (U.S. 7,384,619), assigned to Bar-Gadda, LLC and licensed to Genesys, LLC that will have the potential of eliminating global warming, providing energy security as well as permitting the economic production of hydrogen from any source of water. This unique technology, called RET (radiant energy transfer), needs only moderate heat and water to generate fuel grade hydrogen. Sources of heat include geothermal, solar and biomass. RET can also be powered from electrical sources such as hydroelectric or wind. 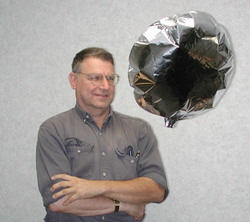 The CEO of Genesys, LLC observes the first ever flight of a hydrogen filled balloon using the RET technology

Water, like oil and coal, needs to be refined in order to convert it to a useful energy source. RET has established that.

The RET technology has been under development for nearly seven years. Genesys, LLC is presently in commercial development. The company intends to be a supplier of renewable hydrogen to the market. This is the first commercially viable technology to produce hydrogen from water in over 175 years since the advent of electrolysis. The principle of the technology relies on the unique properties of the oxygen-hydrogen bond. By using electromagnetic radiation tuned to the OH bond energy it is possible to break the bond with a minimum amount of energy. The rate of hydrogen production using this technology far exceeds that of electrolytic processes. RET is a continuous process technology that also operates at room temperature. RET is modular and easily scaleable as well as carbon neutral. As a result of this revolutionary approach, RET modules may be added or subtracted very quickly to respond to changes in hydrogen demand. The company has a demonstration mini-pilot plant producing hydrogen and oxygen. On October 21, 2009, the company filled and floated its first hydrogen balloon using the patented RET (radiant energy transfer) technology and proprietary hydrogen separation system. This innovative hydrogen separation system, developed by the company, is capable of adjusting hydrogen purity levels in real time, thus meeting different customer requirements. This element of versatility does not exist in the energy industry today.

In a live demonstration of the RET technology, Mayor Darren Cordova of Taos, New Mexico said, “I foresee great success in the future of your technology. I also predict that it will (RET) reduce global warming, generate new jobs, and increase our energy security”. After the demonstration, the Mayor further stated, “ We look forward to making the Town of Taos and the State of New Mexico the first to benefit from your revolutionary invention.”

Geothermal heat is a vast resource for RET:

Geothermal heat is plentiful, renewable and non-polluting. It can be used to generate hydrogen from water using this technology. The U.S. has enough geothermal heat to be equivalent to 60,000 times the energy consumption today. The RET can operate using low grade heat (less than 100 C) so that expensive drilling for high temperature geothermal reservoirs are unnecessary. In that mode, water (sea or waste) is injected down the well and steam is created at the bottom that is used to generate both hydrogen and electricity. The electricity is used to assist the RET process and the hydrogen is generated from the waste steam as it exhausts from the turbine. The capital costs are envisioned to be much smaller than electrolysis process equipment. The RET process, using waste heat, can generate its own electricity whereas electrolysis must obtain electrical energy to operate from external sources (many of which originate with fossil fuels).

Another large potential source of geothermal heat is the retrofitting of abandoned oil wells. There are approximately 350,000 abandoned oil wells in the United States alone. Old oil fields may be recycled to generate hydrogen in large quantities without the need to drill new geothermal wells. The RET technology needs only a small fraction of that to satisfy all of the U.S. energy needs for the foreseeable future.

B.B. Blevins, former Executive Director of the California Energy Commission and a member of Governor Schwarzenegger’s first Climate Action Team stated, “Geothermal energy and heat from abandoned oil wells represent a substantial resource that the RET technology can tap to produce commercial quantities of hydrogen. This can have a major positive impact on California’s clean energy needs for the future.”

The technology can be retrofitted on the exhaust of a steam turbine to provide both electricity and hydrogen. Waste steam is commonly condensed in power plants and the energy contained in it is removed, accounting for more than half of the original energy lost. By applying this technology to a conventional power plant, it is possible to increase the efficiency of a power plant by generating hydrogen from the waste steam, thereby utilizing almost all of the original energy of the steam. Generating hydrogen using RET is more efficient and cost effective than producing only electricity using conventional power technology. RET produces no emissions, so it is environmentally benign.

Hal LaFlash, Director of Renewable Energy Policy and Planning at PG&E, a major utility company located in Northern California, said, “ When your project (Genesys, LLC) is ready for larger-scale demonstration … we would like to explore the possibility of demonstrating the technology at one of PG&E’s generation facilities where the technology could be coupled with waste steam resources.”

Winston Hickox has stated, “as the former Secretary of the California Environmental Protection Agency (CalEPA), I can readily appreciate the potential of this technology with respect to our efforts to address the critical environmental issues of the day”. He also said, “The fact that you can also convert wastewater to hydrogen has additional major implications for the environment.”

A RET hydrogen processing plant can be established near the customer. Thus, a transition to a carbon neutral hydrogen economy can be realized with the existing infrastructure. RET is a flexible technology that can be located in and about urban areas in order to reduce the cost of transporting hydrogen.

Mr. Ronny Bar-Gadda, the CEO of Genesys, LLC has stated, “In an age of global warming and peak oil, it is important to find a renewable resource that is plentiful and economic without damaging the environment. Water fits that criteria. Water, like oil and coal, needs to be refined in order to convert it to a useful energy source. RET has established that.”

Ronny Bar-Gadda, CEO: Mr. Bar-Gadda is an experienced inventor and developer of energy conversion and in-situ chemical generation technology, having completed 12 patents and 5 commercial product launches during his career. As Exxon’s first Biomass Energy Program Manager (Thermal Gasification and Pyrolysis), he developed and commercialized biomass and coal to gasoline technologies as well as developed a widely used catalyst for gasoline upgrading. He also held key management and technical positions at Applied Materials, Mattson Technology, and Philips Research Laboratories. Most recently, as CEO of Ronal Systems, Mr. Bar-Gadda raised $12 Million for the company and led the development of innovative semi-conductor process tools sold to various semiconductor companies. Intel and Cypress Semiconductor were major investors in the company. Mr. Bar-Gadda earned a Bachelors of Engineering from Cooper Union and an M.S.E. from the University of Pennsylvania in Chemical Engineering and Chemistry.