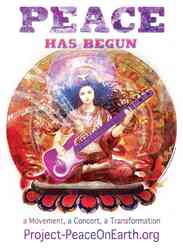 Project-Peace on Earth (PPOE) is announcing its worldwide concert for peace, which will take place at Manger Square Bethlehem in Palestine on September 25th, 2010, following the United Nations International Day of Peace.

To put on this extraordinary event, Project-Peace on Earth has assembled a concert production team that includes some of the most established music industry professionals, such as Charlie Hernandez, Jr., tour manager for The Police and Sting; Barry Dane, producer of the world’s largest Tsunami Relief concert “Force of Nature”; Marc Scarpa, internet concert producer; 2008 Beijing Olympics Committee member Kevin Lee, and Ralph Simon, who has produced the mobile phone content for Live 8, Al Gore’s LIVE EARTH, and the TED Conference’s Pangea Day.

With the intention to uplift and inspire the human spirit to experience a state of inner peace and be the change for good in the world, this six-hour global musical prayer for peace will involve internationally renowned musicians performing sacred musical prayers of peace to an audience of over one billion people at various spiritually recognized sites in the world. Project-Peace on Earth will be issuing special invitations to a select number of high-profile musicians to perform at the event.

USAID and Carana in the Middle East will fund the event production in Palestine, with White House Special Middle East Peace Envoy George Mitchell assigning an agent to work with PPOE to coordinate with Israel, Palestine, and the Quartet. The Palestinian government and City of Bethlehem have granted permission to host the event in the country and provide security for the concert, as well as to produce live, interactive musical bridges between Palestine and other countries.

To view the promotional video, become a sponsor, or learn more about the event, please visit http://www.Project-PeaceOnEarth.org.