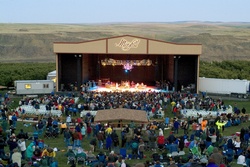 Performing this summer on the winery’s awe-inspiring stage – perched on a bluff overlooking the Columbia River and majestic Mt. Hood – will be Train, Lyle Lovett, Jackson Browne, Natalie Merchant and Earth, Wind & Fire.

Maryhill Winery & Amphitheater is thrilled to announce a crowd-pleasing lineup of nationally-acclaimed artists for their 2010 concert series. Performing this summer on the winery’s awe-inspiring stage – perched on a bluff overlooking the Columbia River and majestic Mt. Hood – will be Train, Lyle Lovett, Jackson Browne, Natalie Merchant and Earth, Wind & Fire. Sponsored by Sterling Savings Bank, tickets for the 2010 Maryhill Winery concert series go on sale Saturday, April 24 at 10 a.m. through TicketMaster.com.

Located on the Washington-Oregon border, Maryhill Winery’s 4,000-seat outdoor amphitheater offers sweeping views of the Columbia River Gorge. The amphitheatre is built into an existing slope on the grounds next to the winery and tasting room, enchanting lovers of music, wine and the great outdoors with its magic every year. When winery owners Craig and Vicki Leuthold rebuilt the stunning amphitheater just three years ago, they had just one goal in mind.

“We wanted to provide wine and music enthusiasts in the Pacific Northwest and beyond with a venue unlike any other,” said Craig Leuthold, owner and founder of Maryhill Winery. “There are very few places where you can sit outside on a warm summer night enjoying live music by fantastic artists and sipping award-winning wine, all while taking in the breathtaking views offered by the Columbia River Gorge. We offer something truly unique and look forward to offering our guests the high caliber lineup we have this year.”

All concerts take place at 7 p.m. the night of the event. Tickets, which go on sale April 24, range in price from $35 to $70 (plus service charges), depending on the show. Concert dates at Maryhill Winery & Amphitheater are as follows:

Maryhill Winery & Amphitheater is located in Goldendale, Wash. – a short 90 minute drive from Portland, Vancouver and the Tri-Cities, and just three hours from Seattle. Established in 1999 by Craig and Vicki Leuthold, Maryhill is ranked among the top 15 wineries in Washington state offering an outstanding 23 varietals and 28 award-winning wines. Nestled among rows of vines along the stunning Columbia River, Maryhill is a popular destination for picnics, weddings and special events featuring a 3,000 sq. ft. tasting room that draws more than 75,000 wine enthusiasts from around the globe each year.

ADDITIONAL ARTIST INFORMATION
Train – July 10 – 7 p.m.
Over the course of 15 years, Train has made its mark on music history with their Grammy-Award-winning song "Drops of Jupiter (Tell Me)" and chart-topping singles "Meet Virginia" and "Calling All Angels." Since forming in San Francisco in 1994, the multi-platinum selling band has traveled a long, successful and sometimes arduous journey. Following their 2006 release, For Me, It's You, the band took a three-year hiatus, and in that time, Train has, for all intents and purposes, experienced an epiphany as a whole. Now, with their fifth album, Save Me San Francisco, Train has channeled their early days, revisiting the roots rock sound that has made the band such a tour de force – and, in turn, the band is united stronger than ever before.

Lyle Lovett – July 17 – 7 p.m.
Lovett's music career began as a songwriter, but he soon signed with MCA Records in 1986 and released his eponymous debut album. While typically associated with the country genre, Lovett's compositions often incorporate folk, swing, blues, jazz and gospel music as well as more traditional country & Western styling. He has won four Grammy Awards, including Best Country Album (1996 for The Road to Ensenada), Best Country Duo/Group with Vocal (1994 for "Blues For Dixie" with the Texas swing group Asleep at the Wheel), Best Pop Vocal Collaboration (1994 for "Funny How Time Slips Away" with Al Green) and Best Country Male Vocal (1989) for Lyle Lovett and His Large Band.

Jackson Browne with David Lindley - July 31 - 7 p.m.
Jackson Browne has written and performed some of the most literate and moving songs in popular music and has defined a genre of songwriting charged with honesty, emotion and personal politics. With immortalized songs such as, Running on Empty, The Pretender, Doctor My Eyes, Lawyers in Love, Browne’s been honored with inductions into the Rock and Roll Hall of Fame (2004) and the Songwriter's Hall of Fame (2007). Browne’s latest release, 2008’s Time The Conqueror, is his most recent material and extremely popular with his loyal fans.

Natalie Merchant – August 7 – 7 p.m.
This new collection of songs, Leave Your Sleep, is Natalie’s first studio album since 2003. It is the most elaborate project she has ever completed or even imagined. “This time in the studio I really wanted to experiment so I called on some of the most accomplished musicians in Cajun, blue-grass, reggae, chamber and early music, jazz, and R&B, as well as Balkan, Chinese and Celtic folk. Some were old friends and some were artists whose work I had admired from afar, such as The Wynton Marsalis Quintet, Medeski, Martin & Wood, The Klezmatics, members of the New York Philharmonic, Lúnasa, The Chinese Music Ensemble of New York, The Memphis Boys, Katell Keineg, the Ditty Bops, The Fairfield Four and Hazmat Modine. The sessions were recorded in live ensemble settings to capture a fresh and spontaneous energy; they were some of the most magical experiences I’ve ever had making music.

Earth, Wind & Fire – August 28 – 7 p.m.
During the 1970s, a new brand of pop music was born - one that was steeped in African and African-American styles - particularly jazz and R&B but appealed to a broader cross-section of the listening public. As founder and leader of the band Earth, Wind & Fire, Maurice White not only embraced but also helped bring about this evolution of pop, which bridged the gap that has often separated the musical tastes of black and white America. It certainly was successful, as EWF combined high-caliber musicianship, wide-ranging musical genre eclecticism, and '70s multicultural spiritualism. "I wanted to do something that hadn't been done before," Maurice explains. "Although we were basically jazz musicians, we played soul, funk, gospel, blues, jazz, rock and dance music...which somehow ended up becoming pop. We were coming out of a decade of experimentation, mind expansion and cosmic awareness. I wanted our music to convey messages of universal love and harmony without force-feeding listeners' spiritual content." Earth, Wind & Fire kept recording and in 1996 released Avatar and Greatest Hits Live; followed by 1997's In The Name Of Love; 2002's That's The Way Of The World: Alive In '75; Live In Rio which was recorded during their 1979 "I Am World Tour;" 2003's The Promise, which included the Grammy-nominated "Hold Me" and 2005's Illumination, which included the Grammy-nominated "Show Me The Way."

About Maryhill Winery
Established in 1999 by Craig and Vicki Leuthold, Maryhill Winery is the 15th largest winery in Washington state, producing 60,000 cases annually. Nestled among rows of vines along the stunning Columbia River in Goldendale, Wash., Maryhill is a popular destination for picnics, weddings and special events, with an adjacent 4,000-seat outdoor amphitheater that hosts a world-class summer concert series. Maryhill’s 3,000 sq. ft. tasting room draws more than 75,000 wine enthusiasts from around the globe each year, ranking among the top five most visited wineries in the state. Maryhill sources grapes from some of the most highly-regarded vineyards in the state to produce 23 varietals and 28 award-winning wines.

Beautiful view of Maryhill Winery from the amphitheater.

Maryhill Winery is located in the Columbia Gorge wine region on a bluff overlooking the Columbia River and majestic Mt. Hood.