Nickelodeon Star Is All About The Rules

Noah Munck of "iCarly" Guest Stars On "Rules Of Engagement" 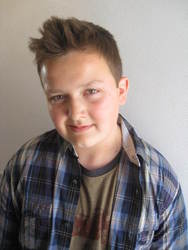 Noah is hot off of winning two orange blimps at this year’s Kid’s Choice Awards, one for favorite TV Show, iCarly and the other for best moves of the night, winning the live viewer vote. This was during the telecast’s Ultimate Dance Smackdown competition. Noah Munck (iCarly) and Matt Shively (True Jackson, VP) got down to Hip-Hop with the Fanboy and Chum Chum characters who freestyled their way to the prize. Noah recently wrapped filming on Sony’s, “Bad Teacher”, with Cameron Diaz and Justin Timberlake and he will begin filming the fourth season of iCarly at the end of May.

About Noah Munck
Noah began his acting career in 2007. He has built a solid resume in a short time with five national commercials, eleven television performances and four theatrical releases; Noah is represented by Jennifer Merlino at Untitled Entertainment (310) 601-2100 and Pamela Fisher at Buchwald Talent Group (323) 852-9555. More info at http://www.noahmunck.com