In a bid to develop new feedstocks with greater sustainability and volume, such as Jatropha and others to achieve higher sustainable production outputs to meet the growing demand, of biodiesel CJP’s R & D centre started studying and identifying some of the most cost-effective and environment-friendly nonfood biodiesel crops and has identified, developed and cultivated as many as 14 non-food oil crops. With years of continuing research, experiments and trials has provided an adage to find and develop 2nd generation biodiesel feedstock with low cost input technology. Among the crops identified as potential sources of biodiesel are Simmondsia chinesis, Pongamia (derris indica), Garcinia indica, Moringa oleifera, Madhuca indica, Ricinus communis, Simarouba glauca, Citrullus colocynthis, algae etc. 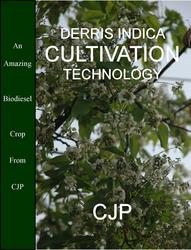 CJP’S Next 5 days Global Jatropha Hi-Tech Agricultural Training Programme October 6-10, 2009 India is all set to introduce you the real world of nonfood biodiesel,Jatropha and others

CJP is dedicated to the development of oil seed bearing trees - non-food multiple vegetable oil plantation and technologies in order to reduce dependence on fossil fuels, bring greater control and security of fuel supply and reduce dangerous climate changing emissions, including CO2. Global warming, greenhouse gas , food-versus-fuel, indirect land use change, deforestation—with these critical issues in the spotlight, the feedstock deficit -plagued industry badly needs less expensive feedstock in form of non-food crop like Jatropha & others. The potential of derris indicia along with moringa has been studied in its effort to look for more viable feedstocks coupled with best available and affordable technology. Emergence of CJP’s new oil crops system may change the entire scenario of the world biodiesel industry. There are many nonfood oil crop under field trials and experiments and after several years of research, CJP has got an improved highly yielding variety of the Derris Indica(Pongamia) and developed enhanced crop cultivation technology with more yield and more oil .Now it is possible to have an oil yield of 330 gallon in 4th year, 1000 gallon in 7th year and 2000 gallon in 10th year from 1 ha plantation of this amazing crop and that too after leaving 70% land for other crops. Derris Indica will yield at Maturity as high as 1000 gallon oil per ha which shall reached as high as 3400 gallon in 15th year and shall be on higher side year by year up to>60 years with proper nutrition, and irrigation. This is truly an exceptional amount of oil from an agricultural crop.

Moringa oleifera is a very fast growing tree; it commonly reaches four meters in height just 10 months after the seed is planted and can bear fruit within its first year. Its pods are triangular in cross-section (30 to 50 cm long) and legume-like in appearance. These pods have oil rich black and winged seeds, which can be crushed to produce biodiesel. Moringa could yield +3 ton oil per ha and that it could be used for food in times of shortages. The seeds contain 30 percent to 40 percent oil that is high in oleic acid. The meal yields about 61 percent protein. Biodiesel made from Moringa has better oxidative stability than biodiesel made with most other feedstocks the crop’s multiple dimensions would make it attractive to farmers worldwide. The Moringa oleifera tree that has enough credentials: a higher recovery and quality of oil than other crops, no direct competition with food crops as it is a edible source of fuel, and no direct competition with existing farmland as can be grown for both purpose same time

Talking on the new biodiesel crops, the Director Plant Science Mr. R.R. Sharma said “Pongamia, Moringa, Castor, Simarouba, algae must be regarded as a sure source of 2nd Generation Biodiesel and the foundation around which a profitable Business plan can be built for their ability to provide large amount of oil and pure hardiness and stress handling ability. The combination of two or more crops may yield 1000 gallons to 2000 gallons per ha which may reach beyond 3000 gallon after maturity. Emergence of the new crop system may change the entire scenario of the biodiesel industry and shall provide much relief to the industry which desperately in a need of a viable sustainable non-food feed stocks.”

He further said “ CJP’S Next 5 days Global Jatropha Hi-Tech Agricultural Training Programme October 6-10, 2009 India is all set to introduce you the real world of nonfood biodiesel,Jatropha and others” where the attendees shall also have the opportunity to interact with these new crops science, agronomy and its cultivation technology etc. as have also been included in the course”
To know more kindly login http://www.jatrophabiodiesel.org

About CJP
CJP is dedicated to the development of oil seed bearing trees (OSBT) -- non-food multiple vegetable oil plantation and technologies in order to reduce dependence on fossil fuels, bring greater control and security of fuel supply and reduce dangerous climate changing emissions, including CO2.
CJP is pioneering the science, planting and production of inedible vegetable oils by planting of a variety of tree and non-food crop plantation.
CJP is engaged in scientific commercialization of non-food fuel crop- that designs and implements the growing of various oil seed bearing tree (OSBT) crops worldwide in a structured Agri-Supply chain, Value additions of inedible oil seeds and research activities thereon & provides support/services from "Soil to Oil" for development and establishment of the non -food Bio-fuel crops.
CJP use its proprietary knowledge to implement programmes through its expertise, technology and IPR knowledge creating new industry and job creation and the offsetting of climate change.