Estonian Prime Minister Andrus Ansip recently visited Morocco to boost cooperation between the two countries, especially in the energy sector, with specific regard to oil shale deposits and production. Morocco’s Honorary Consul in Estonia and owner of the investment company KC Grupp, Margus Reinsalu, stresses the importance of the cooperation for both countries. 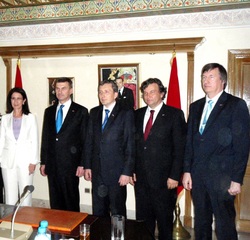 Group photo after signing the agreement between Eesti Energia (Enefit) and Moroccan energy minister, from the left: The Minister of Energy, Mines, Water and Environment Amina Benkhadra, Estonian Prime Minister Andrus Ansip, Chairman of the Management Board of Eesti Energia Sandor Liive, MoroccoⳠHonorary Consul in Estonia Margus Reinsalu and Ambassador of the Republic of Estonia to Portugal and to the Kingdom of Morocco Mart Tarmak.

Margus Reinsalu stresses the importance of such relations and says: “For example, in the oil shale area both countries have much to offer each other. And I also see potential in the technology sector.”

Important economic relations including a memorandum of understanding relating to oil shale deposits were forged between Morocco and Estonia last week during an official visit to the North African country by Estonian Prime Minister Andrus Ansip and a select business delegation. Estonian entrepreneur and owner of the investment company KC Grupp, Margus Reinsalu was a member of the delegation. The official two-day visit was made to build closer economic relations and Estonian-Moroccan ties.

Morocco’s Honorary Consul in Estonia and a businessman with international experience, Margus Reinsalu stressed the importance of such relations, saying: “For example, in the oil shale area both countries have much to offer each other. And I also see potential in the technology sector.”

In the course of the meetings, the Estonian state-owned energy group Eesti Energia, internationally operating under the brand Enefit, signed a memorandum of understanding with the Minister of Energy, Mines, Water and Environment Amina Benkhadra, under which it gains an exclusive right to study some oil shale deposits of Morocco.

If the studies are successful, Enefit has an interest in developing Moroccan oil shale resources and offering Enefit’s oil shale production technology and know-how to the state. Enefit is the world’s largest shale-to-energy company with a very unique know-how and technology. Morocco on the other hand has some of the largest oil shale deposits in the world while importing 95% of its energy from abroad.

Besides the energy agreement, Estonian and Moroccan officials held talks also on ways to advance bilateral cooperation in technology and trade.

For more information about KC Grupp, owner Margus Reinsalu’s recent involvement in Estonia’s official delegation to Morroco or the developments in oil shale cooperation made during the delegation’s visit, go to kcgrupp.com.