World Cup promotion offers Argos customers the chance to win £5,000 worth of prizes 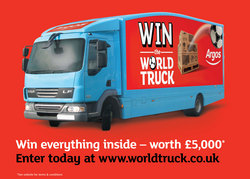 Argos, the UK's leading online high street retailer, is preparing the nation for the World Cup with the launch of http://www.worldtruck.co.uk - a digital hub which includes the chance to win £5,000 worth of Argos products including everything you and your family need to watch, play, support and entertain ahead of the huge sporting event this summer.

Talking you through the content is 'Barry the truck driver' from his customised Argos World Truck. Barry is only too keen to explain what it's all about through a series of videos, which include some of his impressive football skills and Peter Crouch inspired dance moves.

Launched by Argos to engage customers before, during and after the exciting summer of football, the site is packed with exciting promotions, products and prizes, including the entire contents of Barry's World Truck being up for grabs if you enter the online competition.

Entrants stand a chance of winning a TV, laptop, games consoles and bags of football apparel from the UK's number one sports equipment retailer. All the BBQ party entertaining kit you could wish for is also on offer from garden furniture to a comfy sofa if the weather is not on our side.

Top of the range LG HD LCD TVs are also going to be given away every week on the World Truck site to the person who is closest to correctly guessing the real location of the 'World Truck' through Barry's sat nav. The random draw will take place every Wednesday at mid-day with the last chance to win coming on 14th July, meaning one lucky winner will be celebrating long after the final World Cup whistle.

Meteorite was responsible for creating Argos' 'Giant Jar' campaign, which has won over 20 industry awards since 2008.

About Argos
Argos is a unique retailer recognised for choice, value and convenience. It sells general merchandise and products for the home from over 700 stores throughout the UK and Republic of Ireland, online and over the telephone. In the last financial year, Argos sales were £4.3 billion.

Argos serves over 130 million customers a year through its stores. On average, 17 million UK households, or around two thirds of the population, have an Argos catalogue at home at any time.