Hayden Hawke, author of the Secret Gold Guide, has released a brand new leveling guide with a fresh twist from the typical leveling guides used today. 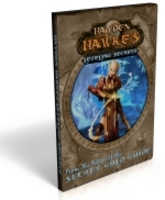 Leveling is about more than just getting to 80 as fast as possible. It's not that leveling fast isn't important, it's just that leveling while having fun and learning how to play your character is a lot more important

Hayden Hawke has just released a brand new leveling guide. This guide shows World of Warcraft players the best and fastest ways to reach level 80 using methods that encourage player development and out of the box thinking.

WoW leveling guides have existed since WoW was first released but Hayden has created a new spin on the guides by providing information for not only leveling by soloing, but also by AoEing, questing, and doing run throughs.

The Leveling Secrets Guide contains tons of information and lets players pick how they want to level up. The guide can be started at any level and allows players to pick the best way to level up based on what class they are and what their situation is at the moment.

Hayden is known for her Secret Gold Guide and this leveling guide, while not a gold making strategy guide, also provides players with methods for leveling that will also earn them thousands of gold while they do nothing but level up.

While WoW has been out since 2004, there is still a high demand for leveling information as new players start the game every day and veteran players create alternative characters to play. With the upcoming release of World of Warcraft's newest expansion, Cataclysm, there is good reason to level up now so that when it is released players are ready to raid and explore new high end content.

In a recent interview with Hayden Hawke she stated, "Leveling is about more than just getting to 80 as fast as possible. It's not that leveling fast isn't important, it's just that leveling while having fun and learning how to play your character is a lot more important. If you level to 80 using some of the in-game addons out there that simply use an arrow to point you where to go you end up not really thinking for yourself and not learning how to actually play your character. A lot of these types of guides don't focus on players that already have high level characters, which a large number of players do have, and ignore heirlooms and run throughs as superior ways to level. My Leveling Secrets Guide shows players multiple ways to level and avoids using addons and tatics that bend the rules Blizzard has set forth in its EULA."

With over 10 million subscribers and a new expansion set to release soon World of Warcraft is still the number one MMO on the market today and leveling and making gold are still as important for millions of people now than ever before.