LP33 Launches an all New Version of the LP33.tv Music Discovery Site and a Music Management Division

New music entertainment business LP33 has announced two major developments. An all new version of its flagship site LP33.tv has been released building on the rapid growth of its music entertainment and news service. It also revealed the launch of LP33 Music Management, headed by legendary A&R man Michael Rosenblatt. 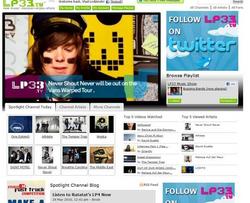 ..a wide range of innovative tools to get our content where the audiences are, be that via our Facebook apps and embeddable media player, on mobile devices, or on TV screens..

LP33 has recently seen much success and growth with its mobile offerings, and today it capitalizes on this momentum with the launch of an all new version of its flagship music discovery and entertainment website LP33.tv. The site boasts a new media player and user interface along with improved discovery features and enhanced sharing tools. In addition, users are now provided with an information feed and a redesigned navigation toolbar. Further features are being rolled out over the coming weeks.

CEO Andrew Bentley states, “Having focused on building a wide range of innovative tools to get our content where the audiences are, be that via our Facebook apps and embeddable media player, on mobile devices, or on TV screens, we decided it was time to really upgrade the experience of our home platform, LP33.tv. This also coincides with the first announcement from our music entertainment development program, which will see LP33 launch further divisions in the short and mid-term”.

As part of its expansion program LP33 today also announced “LP33 Music Management” to be headed up by famed A&R executive Michael Rosenblatt. Michael grew up in music as son of the legendary music executive Eddie Rosenblatt and carved his own niche quickly. He first came to prominence when he discovered Madonna for his then boss Seymour Steins. Further discoveries include the B-52’s, Depeche Mode, New Radicals, Augustana, and many others. LP33 Music Management already has a number of artists in development.

Rosenblatt comments, “Getting LP33 off the ground has been a tremendous ride, and I’m so psyched at being part of the new wave reshaping the music industry. Now that the site and business are established and rising fast, it’s time to get back to my first love of developing a slate of the great raw talents that we’ve all discovered here. I’m looking forward to sharing more news soon”.

Note: LP33 is experiencing success and traffic growth on its mobile platform, http://m.lp33.tv and associated apps. Apple recently named the LP33 Web App as a Staff Pick. This adds to LP33’s impressive tally of stats, including being #1 in its category class at the Blackberry store, a top rated Nokia app, and having highly popular Android & Palm apps. Across all platforms, total downloads have this week reached a quarter million.

About LP33
LP33 is a music entertainment and music discovery business operating across multiple platforms, as well as in a B2C capacity.

The company is uniquely powered by its global A&R Scout Network which researches the best in emerging artists. We broadcast original content across all of LP33's platforms, which includes http://LP33.tv, LP33 News Blog, mobile devices and apps, Facebook, IPTV, in-store, cable, and terrestrial broadcast. Our music recommendations and TV content are supported by our state of the art social network sharing technology.

On the B2B side, LP33 offers its in-house research, production house, and technical services to a number of major corporate partners.