Severe hail storms recently in Oklahoma have turned many roofs into Swiss cheese. However, those roofs with DaVinci synthetic slate tiles have experienced no damage. 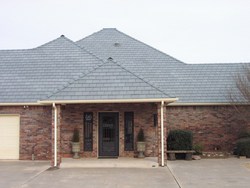 Our roof is holding up fine

Homes and businesses throughout Oklahoma have taken a beating during the past several weeks with grapefruit-sized hail. While many roofs look like Swiss cheese due to the impact of powerful hail storms, some homes with DaVinci synthetic roofing tiles were unaffected and look brand new.

“We’ve just experienced one of the worst hail storms in Oklahoma City’s history and there are hundreds of destroyed roofs everywhere,” says Thad Jennings, president of Jenco Roofing out of Oklahoma City. “Every ceramic, concrete, metal, asphalt and composite roof I’ve seen in this area has been damaged by the hail storms.

“However, the synthetic slate DaVinci roofs we’ve installed over the past several years on homes in the same area are completely unaffected. It’s like a Superman roof that nothing can touch. The synthetic roofs look like they were just installed yesterday. As a result, I have intense interest right now in a dozen new roof system projects featuring the DaVinci product based on the incredible outcome of this storm.”

Throughout the state, synthetic roofs are being singled out as the only winners of the recent severe weather in Oklahoma. In the City of Nichols Hills, Police Chief Richard Mask issued a statement to residents after the storms that included an observation that synthetic roofs survived the storms quite well. “We have noticed that the roofs … made to look like slate, were undamaged while other roofs were completely destroyed, particularly slate roofs,” according to Chief Mask’s statement.

Roofing installer Jim Hofegartner believes this was the worst hail storm he’s witnessed during his 35 years as a roofer. “There were grapefruit-sized hail and 60 mph winds that pounded our area,” says Hofegartner, president of Central Roofing and Construction Company in Luther, Okla. “A DaVinci Aberdeen slate roof we installed a few weeks ago in Nichols Hills received minimal damage --- especially compared to the concrete tile roof next door that was totally destroyed.”

According to Hofegartner, the windows and siding of the home were broken and chipped, but the major sections of the roof were not damaged. “We’ve had several homeowner association representatives come by to see this roof along with other people in the neighborhood,” says Hofegartner. “They’re all impressed with how well this synthetic roof stood up to these severe weather conditions. I expect this will positively influence people to invest in polymer roofs now that they have to replace their ruined roofs.”

In Blanchard, Okla., where penny-sized hail damaged many buildings, homeowner Kathy Bradshaw reports that the new Bellaforté roof on her 3,800-square foot ranch-style home easily survived the recent storms.
“Our roof is holding up fine,” says Bradshaw. “The research we did before having the DaVinci roof installed earlier this year has really paid off. We wanted a roof that would stand up to the severe weather conditions we experience in our state. Our decision to invest in synthetic roofing tiles has already proven wise based on the terrible storms we’ve had so far in 2010.”

DaVinci Roofscapes has manufactured award-winning synthetic slate and shake roofing since 1999. The polymer roofing tiles are virtually maintenance free and far more cost effective than the natural product. DaVinci leads the industry in tile thickness, the tile width variety and the greatest selection of subtle earth-toned colors. DaVinci proudly makes its products in America and is a member of the National Association of Home Builders, the Cool Roof Rating Council and the U.S. Green Building Council. For additional information call 1-800-328-4624 or visit http://www.davinciroofscapes.com.