LTL PRINTS, the premium wall graphics company, today launched an exclusive collection of Bernard of Hollywood wall graphics, featuring 'Larger Than Life' images from the archives of the legendary photographer of Hollywood's Golden Era, Bruno Bernard. Bernard of Hollywood premium wall graphics from LTL PRINTS are available in a range of customer-selected sizes (from laptop-size up to seven feet tall), are self-adhesive and will stick to almost any surface (walls, windows, even ceilings), and can be removed and re-hung 100 times without leaving a mark or damaging your walls. Additional information is available via http://www.LTLprints.com/BernardOfHollywood. 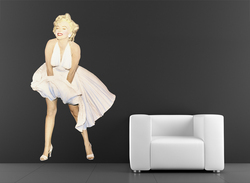 Bernard of Hollywood is a legendary photographer whose vision epitomized Hollywood's Golden Era, and LTL PRINTS is absolutely honored to bring his iconic legacy to this new medium...

Bernard of Hollywood premium wall graphics from LTL PRINTS are available in a range of customer-selected sizes (from laptop-size up to seven feet tall), are self-adhesive and will stick to almost any surface (walls, windows, even ceilings), and can be removed and re-hung 100 times without leaving a mark or damaging your walls.

The New York Times has referred to Bruno Bernard as 'The Discoverer of Marilyn Monroe' and 'The Pioneer of Pin-Up Photography', and in 1984, Bruno Bernard was the first stills photographer to be honored by the Academy of Motion Picture Arts & Sciences with a 50-year retrospective of his work. Bernard's famous "Marilyn in White" with her billowing white dress was singled out in 1999 by the Museum of Modern Art in New York as the photographic "Symbol of the Century" in their "Fame After Photography" exhibition. The International Center of Photography also chose this image by Bernard for their documentary "20 Unforgettable Photographs".

"Bernard of Hollywood is a legendary photographer whose vision epitomized Hollywood's Golden Era, and LTL PRINTS is absolutely honored to bring his iconic legacy to this new medium," according to John Doffing, VP Marketing at LTL PRINTS. "Our first Bernard of Hollywood collection features some of his most celebrated images, now available as premium large-format repositionable wall graphics from LTL PRINTS."

"My father created larger-than-lifesize cutouts of his pin-ups for several exhibitions in the 1950's - created with blown-up photographs and an exacto knife," according to Susan Bernard. "So I am absolutely thrilled that LTL PRINTS is able to bring my father's photography to new generations around the world, using today's latest print-on-demand technology and state-of-the-art new materials."

"When I first met with the LTL PRINTS team, I was astonished by their passion and impressed with the concept of taking my father's work to a new medium which was both cutting-edge and artistically redeeming," according to Susan Bernard, who has joined the LTL PRINTS Advisory Board. "Having a 'Larger Than Life' Marilyn Monroe, the quintessential cinema icon, or a dazzling pin-up girl winking right at you, is a dream come true for anyone who wants to invite Bernard of Hollywood into their lives and onto their walls."

Bruno Bernard, professionally known as Bernard of Hollywood, was one of the most sought-after glamour photographers of Hollywood's Golden Era. He has been called "the Rembrandt of Photography," and "the discoverer of Marilyn Monroe." He was the first still photographer to be honored by the Academy of Motion Picture Arts & Sciences, in 1984, with an honorary exhibition of 150 of his photographs of such luminaries as Clark Gable, Marilyn Monroe, Gregory Peck, Ginger Rogers, John Wayne, Marlene Dietrich, Rita Hayworth, Elvis Presley, Lucille Ball and many others. His legendary studio on Sunset Boulevard was a Hollywood landmark for decades and he was one of the only photographers of his era who opened his own studio and ended up independently running three studios.

Bernard fled Nazi Germany in 1937, alone and penniless, with a doctorate degree in criminal law. His legendary studio opened n 1943 on Sunset Boulevard, and Bernard soon branched out to his desert oasis at the Palm Springs Racquet Club, and to the exclusive hideaway for the stars at the Riviera Hotel in Las Vegas, where he ran a glamorous penthouse salon photographing headliners and the most gorgeous showgirls of the time.

Born into poverty 1912 in Berlin, Germany, Bernard and his four siblings were on welfare by the time he was eight years old and were placed in orphanages. Encouraged by his ailing parents to get an education, he attended Kiel University where he received his doctorate in criminal law. He was amongst the two per cent of Jews to gain a doctorate in 1934. But as general secretary of a Jewish underground organization, his life was at risk, and he was on the Gestapo blacklist.

After seeing the film 'San Francisco', Bernard was so moved by the camaraderie between stars Clark Gable and Spencer Tracy, that he changed his plans to escape to Rio de Janeiro, and in 1937, at the age of 26, he emigrated to America, where he continued his post-graduate studies at the University of Berkeley.

By 1940, Bernard was torn between academia and the arts and became a directorial apprentice under Max Reinhardt's Actor's Workshop. He set up his first darkroom in the basement of his Hollywood apartment in 1941. Shortly thereafter, he opened his first studio on the Sunset Strip. "No one knew the name Bernard, but they all knew Hollywood..." And hence was created the trademark signature, Bernard of Hollywood, that for decades visually insured the image of glamour. Reinhardt planted the seed that came to fruition in Bernard's directorial approach to photography, which would later be coined "the posed candid." With Alberto Vargas in historical collaboration, Bernard of Hollywood would pioneer the art of pin-up photography with the "elongated leg."

By the early sixties, Bernard had sold his studios and returned to his homeland, Berlin and became a foreign correspondent covering for Der Spiegal the Eichmann trial in Israel as a photojournalist and compiled the best selling book, "Israel Impressions." He then moved his world to the seclusion of a Mediterranean villa in Palma de Mallorca, Spain and plunged into his evolution of artistic and intellectual discovery.

After Bernard's passing in 1987, his daughter, author Susan Bernard, founded Bernard of Hollywood Publications to preserve, exhibit, publish and license internationally his legendary work and trademark, introducing his legacy to new audiences around the world.

"The literal meaning of the word 'photographer' is 'light writer,' and I strive to carry on my father's legacy with the light of compassion which guarantees and reflects a time and place when glamour was truly glamourous," according to Susan Bernard.

Susan has published seven pictorial photographic books on her father's work. In 1999,the Museum of Modern Art in New York singled out one of Bruno Bernard's memorable photos of Marilyn Monroe as an icon of the 20th century for their "Fame After Photography" exhibition and Bernard of Hollywood was posthumously given a Lifetime Achievement Award by the Hollywood Chamber of Commerce and the Historical Society. At the same time, the New York International Center of Photography honored Bernard of Hollywood in their television special "Twenty Unforgettable Photos." The 350 page volume, "Bernard of Hollywood's Ultimate Pin-Up Book" (Taschen, 2003) received international acclaim and a full-page story in The New York Times.

Currently, Susan Bernard is working on a new pictorial, "Marilyn in White: 50 Years of Enduring Beauty" for Barnes & Noble / Sterling, and developing a film based on her father's remarkable life and legacy.

LTL PRINTS was founded by entrepreneurs Kendall Schoenrock and Carsten Petzold to bring exclusive custom and branded wall graphics to the world. "We set out to create a platform for creative expression that would bring larger-than-life repositionable wall graphics to empty walls everywhere," according to LTL PRINTS co-founder Kendall Schoenrock. "And we are working with the worlds' premier artists, designers, and brands to literally CREATE a revolutionary new medium."

Premium wall graphics from LTL PRINTS are available in a range of customer-selected sizes (from laptop-size to larger-than-lifesize), are printed with eco-solvent digital inks on a proprietary 'premium self-adhesive repositionable fabric paper' that will stick to almost any surface (walls, windows, even ceilings!), and can be removed and re-hung 100 times without leaving a mark or damaging your walls.

LTLprints.com launched in December 2008, as a platform that enables anyone to create, buy, and sell large-format repositionable wall graphics. "We believe that state-of-the-art digital printing on cutting-edge new materials should be widely available to consumers globally," according to LTL PRINTS co-founder Carsten Petzold (and former COO of Spreadshirt, the European custom t-shirt company). "So we created a platform to bring gorgeous and affordable large-format repositionable wall graphics to the world."

LTL PRINTS is headquartered in Philadelphia, and is privately funded.

Bruno Bernard: Self Portrait with Camera