ProJet showcases Leesburg as a viable alternative to Dulles, with low fuel prices and easy access to Northern Virginia and Washington, DC 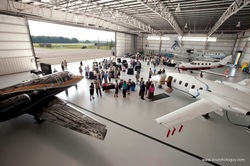 ...Leesburg is clearly the best location for travelers who want priority access to the Metropolitan Washington DC area.

ProJet Aviation, a Metro-DC area aircraft management and worldwide charter company, hosted a grand opening and ribbon-cutting ceremony for their new Jet Center at Leesburg Executive Airport (JYO). Six corporate aircraft are already based at the facility, which features over 25,000 square feet of hangar and office space. The new facility serves as the principal base of operations for ProJet’s growing fleet of charter aircraft, as a compliment to the company’s existing flight operations in Winchester and Manassas Virginia. ProJet also sells Jet Fuel at Leesburg through a partnership with AvFuel.

Mr. Deike updated the crowd on airport improvements, including an Instrument Landing System (ILS) that will be operational this November, and future growth plans to include a runway extension and air traffic control tower. All of the speakers emphasized the importance of business aviation as an economic growth engine for the region and the country.

ProJet Aviation CEO Shye Gilad recognized the contributions of the company's employees. “Congratulations, we all earned this moment together,” said Gilad, “I hope you all benefit from the success of this facility for many years to come.” Gilad also credited strong community support and the airport’s location as key factors that brought ProJet to the area. “As you heard today directly from the mouths of State, County, and Town leaders, the Leesburg Airport has true community support, and it is clearly the best location for travelers who want priority access to the Metropolitan Washington DC area.” The Leesburg Executive Airport features direct access to Dulles and Washington DC via the Greenway (VA route 267).