The Titans Return and Clash in All New Wrath of the Titans DVD!

A Sequel Story Inspired by the 80’s classic Clash of the Titans motion picture! 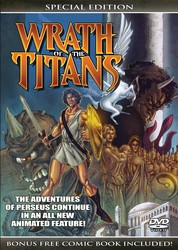 Eagle One Media is proud to announce the upcoming release of Wrath of the Titans – Special Edition on DVD July 20, 2010. With a story developed under the guidance of legendary SFX artist Ray Harryhausen and presented as an animation-style film, fans of the original motion picture can immerse themselves in the further adventures of hero Perseus and his winged horse Pegasus in anticipation of the upcoming Warner Bros. DVD release of Clash of the Titans on July 27, 2010. As an added bonus The Wrath of the Titans Special Edition DVD shall also include a 28 page full color comic book with a unique tie-in story.

Five years have passed since the legendary Perseus defeated the evil Gorgon Medusa, killed the Kraken and assumed the crown of Argos. Things seemed idyllic throughout the kingdom. Yet lurking in the shadows is the one being simmering with hate and discontent. Calibus, once though dead, looks to take his revenge. Perseus stole his bride, stole his position, stole Zeus’ favor, and now Calibus looks to take it back. And with news that a baby boy was born to Perseus and Andromeda, he is chilling that dish of revenge…

The Wrath of the Titans Special Edition DVD utilizes Bluewater Productions bestselling comic book series of the same name and with the addition of animation, voice-over, special, music, creates a fast paced video adaptation that takes viewers back to Greek mythological times where the Gods battled amongst themselves and heroes fought unimaginable creatures. This DVD is available to pre-order at all major retailers such as Amazon, Barnes & Noble, Target, and FYE

A preview of the first 4+ minutes can be viewed on YouTube: http://www.youtube.com/watch?v=gcVOJplUms4

About Eagle One Media

Eagle One Media, Inc. (http://www.eagleonemedia.com) produces animated comic adaptations based on globally licensed properties for the retail market. The company has produced such video for DVD and through digital download based on CAPCOM's video games Street Fighter, television series Voltron: Defender of the Universe, and blockbuster The Terminator. Eagle One Media’s Street Fighter and Voltron productions were recently broadcast over several weeks on the popular Syfy Channel.