Klinge Corporation Ensured Safe Transport of Ice Cores from Antarctica, Across the Equator, and Through the Southwestern U.S.

Three Klinge Corporation refrigerated containers made the final leg of an incredible journey more than a year in the making. The 40’ refrigerated container systems conceptualized by U.S. Antarctic Program (USAP) support staff and designed by Klinge Corp were entrusted with the transport of several million dollars worth of ice core samples collected from Antarctica. Klinge's new refrigerated container systems designed for the USAP includes not only two refrigeration units, but two back-up generator sets, as well. Each piece of equipment automatically switches to its back-up in case of a loss of performance or power to provide the ultimate peace of mind when shipping this valuable cargo. 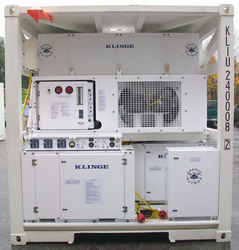 From the intense core drilling process at the main arch, to flying the ice to Antarctica, to the coordination of a ship from half way around the world, the importance of these ice cores was never in question,” said Klinge's Project Manager Allan Klinge.

The success of the mission was a testament to the hardworking and dedicated employees from both companies and to the benefit of having numerous fail-safes in place for such valuable cargo. The Wall Street Journal published an article about the project and discussed the ice core's path from Antarctica to the Colorado lab, including Klinge Corp’s role in making sure everything stayed safely frozen.

The project started out with a Statement of Work and request for quote which required a redundant container system for the transport of a product that represented years’ worth of hard work and effort.

“While we knew this product was important, it was not until we met the scientists, National Ice Core Laboratory (NICL) employees, and project leaders that we understood how much had gone into obtaining these samples. From the intense core drilling process at the main arch, to flying the ice to McMurdo Station on the coast of Antarctica, to the coordination of a ship from half way around the world, the importance of these ice cores was never in question,” said Klinge’s Project Manager, Allan Klinge.

This made the procurement of a reliable transport solution back to Los Angeles and from there to NICL in Denver a critical part of the mission. Even more important, the ice cores were not permitted to rise above -20°C at any point during their 1.5-month travel from the southern hemisphere, across the equator, and through the southwestern United States—otherwise, some of the most critical research related to analysis of the gases contained in the cores would not be possible.

“This can be extremely important in cases where the product will actually combust and explode if not kept at the correct temperature,” said Jason Flynn, Klinge’s Sales Manager. “You can imagine that a ship captain would not be too happy to have a product like this on board unless he knows the container has its own back-up refrigeration unit and generator set.”

Klinge was able to apply its experience in this specialized area to the shipment of the ice cores back to NICL. In fact, Klinge expanded on the built-in redundancies in the system by including not only two refrigeration units, but two back-up generator sets, as well.

Each piece of equipment automatically switches to its back-up in the case of a loss of performance or power to provide the ultimate peace of mind when shipping this valuable cargo.

The sophisticated, yet simple to maintain, redundant Klinge design ensured a successful transfer of the ice back to NICL. The ultimate vote of confidence, of course, comes from the fact that the Klinge containers will return to the ice and complete this journey again in 2011.

Klinge Corporation is the leading provider of specialized transport refrigeration in the world and is ISO 9001 certified.

Founded in 1984, as a spin-off of the Transport Refrigeration Equipment department of York International, Klinge has been actively producing refrigeration units at their manufacturing facilities and headquarters in York, Pennsylvania, USA (with sales offices and workshops in Denmark and Egypt) for over 25 years.

Since the company’s founding, Klinge has focused heavily on research and design and engineering which has cultivated innovative new concepts in the area of specialty transport refrigeration. The company’s customized designs offer customers vital options when standard, mass-produced products cannot fulfill their needs.

The U.S. Antarctic Program is funded and managed by the National Science Foundation’s Office of Polar Programs. Federal grants and support contracts are used to accomplish the scientific research and support requirements in Antarctica. Learn more at http://www.usap.gov.