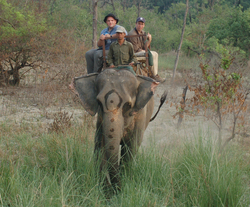 The demand for wild tiger parts is huge and tigers need protection now.

World Wildlife Fund’s Texting for Tigers promotion launched today, giving people the ability to aid in saving wild tigers from extinction through their mobile phones. By texting “TIGERS” to 20222 from a cell phone, a $10 donation will be made to support WWF’s efforts to protect tigers. With as few as 3,200 tigers left in the wild, down from around 100,000 a century ago, the species is one of the most threatened on the planet. WWF’s goal is to double the global tiger population by 2022.

Actor Ethan Suplee, who has appeared in “My Name is Earl,” “American History X” and “Mallrats” among other TV series and films, recorded a video recently while in Asia with WWF to visit the frontlines of tiger protection. Having seen firsthand what is happening to tigers in the wild, Suplee is encouraging people to join him in protecting these majestic animals.

“It’s time for all of us to step up and earn our stripes for tigers,” Suplee said. “The demand for wild tiger parts is huge and tigers need protection now – immediately ¬– to save them from ending up killed and sold on the black market. So make the call – text the word ‘TIGERS’ to 20222 from your cell phone.”

Tiger populations are shrinking fast, as the species is severely threatened by habitat loss and poaching; their skins, bones and other body parts are used in many cultures as medicines, talismans, status symbols and clothing. But tigers can thrive if they have strong protection from poaching and habitat loss and enough prey to eat. A new multimedia piece about the science behind tiger population growth can be found here.

This week, world tiger experts and government officials from the 13 countries with tiger populations are meeting in Bali to develop a draft “Global Tiger Recovery Program.” This document, which is intended as the blueprint for tiger range countries to follow to save the species from extinction, will have a chance to be fully adopted at the Heads of Government Tiger Summit scheduled to be held in St. Petersburg, Russia, from September 15-18, 2010.

This is the first time WWF has used mobile fundraising and all of the donations received will be earmarked directly for tiger conservation. In addition to texting for tigers, WWF is encouraging people on Facebook and Twitter to spread awareness about the current plight of tigers. Supporters can use WWF’s new Facebook application to add a tiger mask, tiger stripes or paw prints to their profile pictures and tag all of their tweets with #savetigersnow.

For more information on WWF’s campaign to save tigers please visit http://www.worldwildlife.org/tigers

World Wildlife Fund
WWF is the world’s leading conservation organization, working in 100 countries for nearly half a century. With the support of almost 5 million members worldwide, WWF is dedicated to delivering science-based solutions to preserve the diversity and abundance of life on Earth, halt the degradation of the environment and combat climate change. Visit http://www.worldwildlife.org to learn more.

A one-time donation of $10 will be added to your mobile phone bill or deducted from your prepaid balance. Messaging & Data Rates May Apply. All charges are billed by and payable to your mobile service provider. Service is available on most carriers. Donations are collected for the benefit of WWF by the Mobile Giving Foundation and subject to the terms found at http://www.hmgf.org/t. You can unsubscribe at any time by replying STOP to short code 20222; Reply HELP to 20222 for help.