Madera County Wines – There’s gold in the hills. Madera County, California's Gateway to Yosemite, has a thriving wine industry that has been earning many awards and faring well when compared to other, more well known, wine regions of the state. 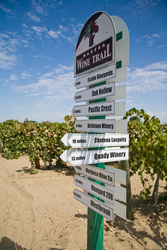 USA Wine Producer of the Year

Madera County is known as California’s Gateway to Yosemite, as it’s the most popular entry in to Yosemite National Park. What many people don’t know is that many wines of exceptional quality that are produced here.

According to Allyson Robison, the many vintners in Madera County have years of experience. “Madera County has a long tradition producing wine and is one of the oldest grape growing regions in America,” she said. “As early as the late 1800’s, settlers homesteaded small farms and planted grapes to produce wine.”

The newest winery along the trail is Idle Hour Winery in Oakhurst. Opened in 2008, proprietors Ana Marie dos Remedios and Deb Payne have won numerous awards for their varieties. They won a pair of gold medals during the 2010 San Francisco Chronicle Competition for the 2007 Tempranillo and 2006 Petite Syrah.

Dos Remedios, who is also the current president of the Madera Vintners Association, said Madera County’s climate is well suited for growing quality grapes, which become quality wines. “I believe Madera County's climate can grow Rhone varieties especially well because the climate, especially during the ripening period, is very similar to that of the Rhone Valley in France where these varieties originate,” she said.

Ray Krause, who along with his wife Tammy own Westbrook Wine Farm just down the road from Idle Hour in O’Neals, said the region’s temperate climate and weather patterns are ideal for his purposes. “The O’Neals area places within Growing Region III on the UC Davis Winkler scale of heat summations,” he said.

“This, and an average 26 inches of rainfall tells us that the weather will complement the cultivation of Red Bordeaux wine grapes. Further supporting our decision to plant in O’Neals are the combined existence of water, granitic soils, altitude, sun orientation, air drainage, chilling days during the dormant period and a close proximity to our Grandchildren and a net effective marketing area of over one million people. It doesn’t get any better than this.”

Wine enthusiasts looking to experience these award winning wines themselves can tour the Madera Wine Trail, which is comprised of eight wineries throughout the county. The Madera Wine Trail hosts three Wine Trail Weekends each year, but most of the wineries are open for tasting outside of those events as well.
To learn more about the wine trail, visit http://www.maderawinetrail.com.