PetRays wins award at International Business Awards and is recognized as a Distinguished Honoree in twelve categories. 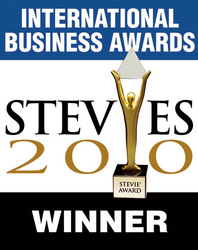 Support Department of the Year

Winning the Support Department of the Year at the International Business Awards is a significant accomplishment and is the result of the hard work and dedication of the entire PetRays staff.”

Nicknamed the Stevie® for the Greek word “crowned,” the awards will be presented to winners at a gala dinner on Monday, 27 September in the Ritz-Carlton Hotel in Istanbul, Turkey.

In addition to winning a Stevie for Support Department of the Year, PetRays was also a Distinguished Honoree in twelve (12) other categories. PetRays was also the recent winner of the People’s Choice award for favorite customer service at the 2010 Stevie Awards for Sales and Customer Service in February 2010.

Honorees were selected through two rounds of judging by business professionals worldwide.

“We congratulate all of the Finalists and International Stevie Awards winners, and we look forward to honoring them for their achievements at our gala awards dinner in Istanbul on 27 September” said Michael Gallagher, president of The Stevie Awards.

“PetRays’ prides itself in providing the absolute best customer service and support in the industry” said PetRays board member Frank Powell. “Winning the Support Department of the Year at the International Business Awards is a significant accomplishment and is the result of the hard work and dedication of the entire PetRays staff.”

About PetRays
PetRays is the recognized leader in providing telemedicine services to veterinary clinics worldwide. PetRays staff of board certified veterinary specialists are available 24/7/365 to help practicing veterinarians provide the highest level of care to their patients. PetRays staff includes radiologists, cardiologists, multiple medicine specialties, and cytologists. Learn more about PetRays at http://www.petrays.com.

Premier Sponsor of The 2010 International Business Awards is Infogroup. National Sponsors include the Korea Business Communicators Association and the Public Relations Society of India. Supporting sponsor is McCann PR Romania. Localization Partner for the 2010 IBAs is Lionbridge.