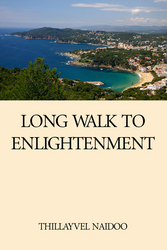 Long Walk to Enlightenment is the author’s attempt to understand the five Middle Eastern religions known as the “Religions of Revelation.” He focuses on Christianity and Islam. Two significant features of Middle Eastern religions are their credence to monotheism and their claims to having been revealed by God. The author makes an earnest attempt to understand how the “wisdom religions,” Hinduism, Buddhism, and Jainism, engage in their search for the Infinite, Absolute Truth. He therefore identifies the major differences between these two groups of religions to make a significant contribution to the science of religion.

Dr. Thillayvel Naidoo retired as lecturer in the Department of Science of Religion at the University of Kwazulu-Natal in South Africa. He was responsible for lectures in Eastern Religions and the Philosophy of Religion. He served as President of the Association for the Study of Religion (Southern Africa) for two terms. ASRSA is affiliated to the International Association for the History of Religions, which holds Congresses once every five years. He presented papers at the Congresses in Rome (1990), Mexico City (1995), and Tokyo (2005) and was one of three Presidents of the Congress in Durban (2000) Dr. Naidoo presented papers at the Parliament of the World’s Religions in Chicago (1993), Cape Town (1998), Barcelona (2004) and Melbourne (2009). Dr. Naidoo has published several books in religion and many articles in academic journals. Dr. Naidoo is married to Sarojini, who teaches mathematics at Danville Park Girls High School.