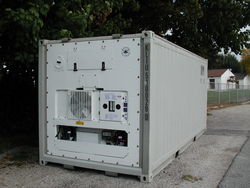 Klinge Corp Model PFR-582Ex for the transport of hazardous cargo

Chemicals producers and distributors can now use specialized container refrigeration systems made by the US company Klinge Corporation to safely store and transport Dangerous Goods inclusive organic peroxides around the world.

The PFR-582Ex provides a rugged and reliable system keeping cargo at a steady temperature while unit motors and components in contact with the cargo area are of explosion-proof and anti spark design.

Trusted by shipping lines and Captains the world over, Klinge equipment is in regular use by military forces, polar research missions and international space programs to contain temperature-sensitive materials that are often of a hazardous nature.

Henrik Klinge, President of Pennsylvania-based Klinge Corporation, said: “Shipping and logistics companies are now facing tougher international shipping codes and more rigorous inspections regimes for hazardous materials this year. Most will not allow materials to be transported without using recognized equipment such as the PFR-582Ex as provided by Klinge Corporation.

“Safety and Insurance concerns are more and more frequently causing containers not to be accepted for ocean carriage if the containers do not feature suitable redundant dual refrigeration systems that are also explosion-proof. The kind of temperature monitoring and safety controls we offer in the PFR-582Ex means peace of mind for all involved,” Mr Klinge added.

For chemical companies, including those who are part of the American Chemistry Council’s Responsible Care initiative, the “most important aspect of peroxide storage is temperature control”.

To comply with US Department of Transport regulations and international rules like the UN Recommendations on the Transport of Dangerous Goods-Model Regulations, temperature controls must be in place for any organic peroxides with a Self-Accelerating Decomposition Temperature (SADT) of less than 50 degrees centigrade.

Even for those peroxides that do have an SADT above 50 degrees, official advice is that they are maintained at temperatures below 30°C (86°F) to maintain product quality, with full access to back-up refrigeration systems as a stringent safeguard.

And, for its secondary system that provides full back-up in the event of any technical difficulties in the primary system, maintaining the pre-set temperature.

Another key aspect of safe handling for hazardous chemicals is the use of careful temperature monitoring and, in the event of unforeseen circumstances, proper alert systems.

Klinge’s PFR-582Ex comes with permanent temperature monitoring, linked in to an independently-powered audible and visual alarm system that will sound in the unlikely event that failure occurs.

Using well-proven technologies, control systems are simple to operate and can link in with satellite communication and GPS locator systems, while temperatures are logged electronically with a built-in printer and alarm system and back-up. This independent temperature logging system acts as a “Black-Box” that log 2 cargo temperatures but have capability for additional 4 temperature and 2 digital inputs.

Klinge Corporation systems are available as externally and internally explosion-proof. And, as is being used by the US Space Program at the moment, there is the option of a fire suppression system and dry chemical fire protection system, with water or carbon dioxide-dispensing systems available.

Maintenance is made easy with all components subject to wear and tear accessible from the front of the unit, meaning a minimum of down-time.

Klinge Corporation has a worldwide network of service points to offer support for any voyage in any location. Spare parts are easy and quick to purchase any time of day or night through the website http://www.reeferparts.com.

With its global headquarters in York, Pennsylvania, along with offices in Denmark and Egypt, Klinge Corporation is certified to the ISO 9001 standard, demonstrating its commitment to quality.