Advocate Mark Horvath Will Enable Homeless People in 28 Cities Across the U.S. to Tell Their Stories and Raise Awareness Via Twitter, Facebook, YouTube and Other Social Networking Sites. 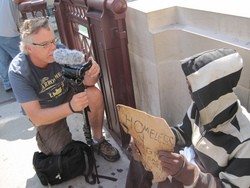 We're using social media to expose the pain, hardship and hopelessness that millions of people face each day

InvisiblePeople.tv - the nationally-recognized nonprofit that tackles poverty and homelessness using the power of social media - embarks today on its 2010 Road Trip U.S.A. to raise awareness and smash stereotypes about the plight of America's homeless.

The tour is scheduled to take InvisiblePeople.tv Founder Mark Horvath (who was himself homeless) to 28 cities, where he will help homeless individuals and families tell their stories via online social media.

"The goal is to make the 'invisible people' in society more visible by bringing them out of the shadows where they are ignored," said Horvath. "We're using social media to expose the pain, hardship and hopelessness that millions of people face each day."

The tour that begins today is Horvath's third such road trip since he founded InvisiblePeople.tv in November 2008. Over the next 72 days he will visit shelters, youth facilities and other places where homeless people congregate, in a mix of rural areas and large cities.

Horvath added, "Each road trip grows larger, along with the homeless population and the reach of social media."

The InvisiblePeople.tv 2010 Road Trip is scheduled to visit the following cities:

Locations and dates are subject to change. Please visit http://www.InvisiblePeople.tv/calendar for schedule updates.

A few facts about homelessness in America:

About InvisiblePeople.tv
InvisiblePeople.tv is a grassroots 501(c)(3) nonprofit founded in 1998 by advocate Mark Horvath (@hardlynormal on Twitter). The organization is primarily self-funded, along with a $50,000 grant from the Pepsi Refresh Challenge. After building a successful career in television syndication, Mark found himself homeless in 1995 following a battle with addiction. He worked hard to clean up his act, and was again living comfortably by 2007 with a three-bedroom house and a 780 credit score. But then the recession hit. After several layoffs and a foreclosure, he was once again facing homelessness. That's when Mark launched InvisiblePeople.tv with just $45 and a budding interest in online social media. In November 2009, he was named "one of the top activists to follow on Twitter" by the Huffington Post. More information is available at: