Australia, U.S. Defense Organizations pick six teams to go “down under” for finals 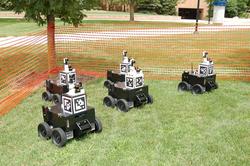 The teams competing in this challenge bring new ideas to the table.

Six high-tech science and technology teams from four continents have been named finalists in the inaugural Multi Autonomous Ground-Robotic International Challenge (MAGIC 2010). Teams from the United States, Turkey, Japan and Australia have been selected by the U.S. and the Australian departments of defense to compete this November in Australia in an effort to develop the next generation of fully-autonomous ground robots.

The six teams are:

“All the judges were impressed with the magnitude of submissions from the teams,” Bochenek explained. “These finalists have survived a rigorous assessment and elimination process against six other semi-finalist teams.”

MAGIC 2010 is a joint initiative of Australia’s Defence Science and Technology Organisation and the U.S. Army Research, Development and Engineering Command (RDECOM). The competition’s aim is to develop teams of robots which can operate autonomously on the battlefield in dangerous situations, keeping Soldiers out of harm’s way.

“We are excited to work with the Australian government on this international collaboration,” Bochenek. “MAGIC 2010 will go a long way to help foster the growth of the next generation of scientists and engineers both in the United States and abroad.”

During the evaluations, teams performed a range of activities to demonstrate certain capabilities including the ability to operate autonomously and to map their surroundings digitally.

MAGIC 2010 will lead to groundbreaking robotics research in critical new arenas that will address operational challenges and save Soldiers’ lives. The work done between the U.S. Army and the Australian Department of Defense spans across the globe in efforts to advance technology for the warfighter.
Australia’s Acting Chief Defence Scientist, Dr. Warren Harch, said the competition can lead to innovative ideas. “The teams competing in this challenge bring new ideas to the table,” he said. “The innovative concepts with these robots can help the government provide new technology for our Soldiers.”

About RDECOM
The U.S. Army Research, Development and Engineering Command is the Army's technology leader and largest technology developer. RDECOM ensures the dominance of Army capabilities by creating, integrating and delivering technology-enabled solutions to our Soldiers. To meet this commitment to the Army, RDECOM develops technologies in its eight major laboratories and research, development and engineering centers. It also integrates technologies developed in partnership with an extensive network of academic, industry, and international partners.

RDECOM provides the Army with an organic research and development capability. More than 17,000 Soldiers, civilian employees and direct contractors form this world-class team. As part of that team, there are 11,000 engineers and scientists, many of whom are the Army's leading experts in their fields. A fundamental characteristic of this workforce is the focus on the Soldier. Whether providing technology solutions to meet current operational needs or developing break-through technologies for the next generation, RDECOM stands at the forefront of what the Soldier eats, wears, fires, flies or drives.

About TARDEC
Headquartered at the Detroit Arsenal in Warren, MI, TARDEC is the Nation's laboratory for advanced military automotive technology and serves as the Ground Systems Integrator for all DOD manned and unmanned ground vehicle systems. With roots dating back to the World War II era, TARDEC is a full life-cycle, systems engineering support provider-of-first-choice for all DOD ground combat and combat support weapons, equipment and vehicle systems. TARDEC develops and integrates the right technology solutions to improve Current Force effectiveness and provides superior capabilities for Future Force integration. TARDEC’s technical, scientific and engineering staff lead cutting-edge research and development in Ground Systems Survivability; Power and Mobility; Intelligent Ground Systems; Force Projection; and Vehicle Electronics and Architecture. TARDEC is a major research, development and engineering center for RDECOM and an enterprise partner in the TACOM LCMC.

For more information about MAGIC 2010, visit us at http://www.dsto.defence.gov.au/MAGIC2010//.
You can also follow us on Twitter @MAGIC2010Robots.