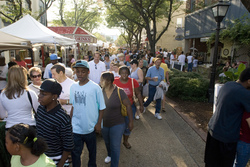 This September 10-12, Hampton, Virginia will welcome an estimated 200,000 attendees

In addition to all of the great musical entertainment, the 28th annual Hampton Bay Days festival will also include over 75 merchandise and craft vendors. During festival weekend, more than 30 food vendors will also be available throughout the downtown area. Those looking for more conventional dining options can choose one of the many eclectic restaurants that line historic Queens Way.

While at Bay Days, don’t forget to educate yourself on the value and importance of the Chesapeake Bay by stopping by the Bay Education and Children’s Area (Friday - Sunday through 6:00 p.m.), located between Eaton and Wine Streets. Featuring over 25 interactive booths, the area is great way to learn about environmentalism, conservationism, clean water, and one of our area’s most important natural resources (and the nation’s largest estuary), the Chesapeake Bay.

The fully interactive Wyland Mobile Learning Center returns to Bay Days for the second consecutive year, helping to educate children on how pollution affects our water. Through a series of exciting activities, visitors can spin the wheel of (mis)fortune to discover the food web, bring rain down over a polluted city to see the impact on a watershed, divert a flowing river to learn about water management, use a computer model to see changes in a lake region over 200 years, or transform a raindrop in the 30-person on-board theater.

As a special treat to attendees, Wyland himself will be available for “Meet & Greet” opportunities. The renowned artist and marine life conservationist will lend his expertise to budding artists at our “Artist for a Day” mural painting experience (located in the Bay Education Center, next to the Wyland Clean Water Mobile Learning Center), as well as autograph Wyland-designed 2010 Hampton Bay Days posters, 2010 Hampton Bay Days t-shirts, and his new interactive book (posters, t-shirts, and books available for purchase). Wyland painting and appearance times will be listed in the official schedule of events online at http://www.baydays.com by August 15, 2010.

Those interested in tall ships will be thrilled to learn that The GODSPEED , a re-creation of one of the three ships that brought America’s first permanent English colonists to Virginia, will dock in downtown Hampton during the festival. The vessel will help highlight Hampton’s 400th Anniversary and the city’s history as a colonial seaport and fishing village, in addition to providing public educational programs focusing on man’s interaction with the ecology of the Bay. Hampton Bay Days also plans to highlight the merchant side of Olde Port Hampton with a dockside replica of the original customs house, re-enactors, and Hampton History Museum programs.

The Hampton Bay Days Fireworks Show (spanning 25-minutes) is one of the largest, longest, and most impressive fireworks displays at any festival. In order to clear the Settlers Landing Bridge for the fireworks, the Harbour Centre -Parking Garage and Settlers Landing Street will close at 8:30 p. m., an hour and a half before the 10:00 p.m. show. Folks who arrive after 8:30 p.m. will not be able to drive on Settlers Landing or park in downtown Hampton.

Partially bordered by the Hampton Roads harbor and Chesapeake Bay, Hampton, with the 344,000 sq. ft. Hampton Roads Convention Center, is located in the center of the Hampton Roads metropolitan area. Hampton is the site of America's first continuous English-speaking settlement and is home to such visitor attractions as the Virginia Air & Space Center and Riverside IMAX ® Theater, Hampton Maritime Center, Hampton History Museum, harbor tours and cruises, Hampton University Museum, Fort Monroe, award-winning Hampton Coliseum, The American Theatre, among others.

The GODSPEED will dock in downtown Hampton during the festival