A global study in 111 countries by Mob4Hire and Business Over Broadway reports on the mobile user experience (mobile handsets, mobile apps, app stores and network operators) impact on customer loyalty (retention, advocacy, purchasing) and how network operators can use this information to accelerate growth. 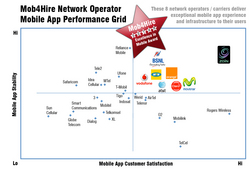 Our survey shows that 65% of smartphone users consider mobile apps when selecting a new network operator, so those that don’t quickly implement a good strategy are going to miss out on the mobile app gold rush.

Mob4Hire, in collaboration with leading customer loyalty scientist Business Over Broadway, today announced its Summer Report 2010 of its “Impact of Mobile User Experience on Network Operator Customer Loyalty” international research, conducted during the Spring. The 111-country survey analyzes the impact of mobile apps across many dimensions of the app ecosystem as it relates to customer loyalty of network operators.

According to the survey, the two best network operators in the world are Vodafone and Zain, which are the only two that appear in the top quadrant of all three grids.

The report is available at http://www.mob4hire.com/services/global-mobile-research for only $495 Individual License (1-3 people), $995 Corporate License (3+ people).