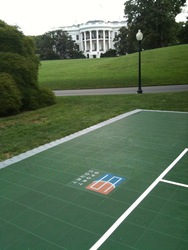 Sport Court at the White House

"The U.S. Tennis Association has chosen Sport Court as the Official Supplier of Modular Flooring."

Sport Court® is teaming up with the United States Tennis Association (USTA) to set up eight colorful QuickStart tennis courts at the White House for its South Lawn Series on Tuesday, August 3.

Appearing at the event will be record-breaking Doubles Team Bob and Mike Bryan and World No. 20 ranked Sam Querrey.

The White House is working with the USTA, which has chosen Sport Court to provide the court surface. Scaled to size for kids, the 36 foot QuickStart courts are smaller versions of a regulation tennis court.
Sport Court, headquartered in Salt Lake City, is the “Official Supplier of Modular Flooring” for the USTA.

After their use at the White House event, the Sport Court surfaces will be donated to the Charlie Norwood Veteran’s Administration Medical Center in Augusta, GA. This is the only V.A. facility in a partnership with an active duty Warrior Transition Battalion (WTB). The WTB is located at Ft. Gordon, GA and wounded soldiers are rehabilitated at the V.A. In addition to V.A. and WTB use, the local YMCA is building a 'Field of Dreams' program for disabled kids in the community. The tennis courts at Charlie Norwood will serve as the tennis portion of the project. The USTA will be offering training and volunteers for the facility as well.

About USTA
The USTA is the national governing body for the sport of tennis in the U.S. and the leader in promoting and developing the growth of tennis at every level -- from local communities to the highest level of the professional game. A not-for-profit organization with 740,000 members, it invests 100% of its proceeds in growing the game. It owns and operates the US Open, and launched the Olympus US Open Series linking 10 summer tournaments to the US Open. In addition, it owns the 90-plus Pro Circuit events throughout the U.S., is a minority owner and promotional partner of World TeamTennis, and selects the teams for the Davis Cup, Fed Cup, Olympic and Paralympic Games. USTA Serves, the National Charitable Foundation of the USTA, provides financial support for disadvantaged youth and people with disabilities through tennis and education programs. For more information on the USTA, log on to usta.com.