The New Black Panther Party, led by Dr. Malik Zulu Shabazz is America's most controversial, slandered and misrepresented Black organization. NBPP leaders will clear up the lies and reveal the truth about the huge "voter intimidation" controversy raging in the media, national mid term elections, congress and the courts. Shabazz and the NBPP will also take on the attacks on Rep. Charles Rangel, Rep. Maxine Waters and Min. Louis Farrakhan. Black Elected Officials and leaders will appear to support the NBPP. 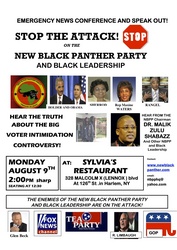 Stop The Attack On The New Black Panther Party and Black Leadership.

Subject: "Stop The Attack On The New Black Panther Party and Black Leadership." The leadership of America's most controversial, slandered and misrepresented Black organization will clear up the lies and reveal the truth about the huge "voter intimidation" controversy raging in the media, national mid term elections, congress and the courts.

All the hot questions will be answered:

Were the Voter Intimidation charges against the New Black Panther Party wrongfully dropped for racial or political reasons?

Will Republicans, Glen Beck, Rush Limbaugh and the rest, succeed in forcing Attorney General Eric Holder to refil charges against the New Black Panthers and their leadership?

Was Shirley Sherrod dropped from USDA so quickly because of the intense pressure on the Obama Administration over the handling of the Panther case?

Is there a GOP or right wing and FOX news conspiracy to frighten white voters and whip up a toxic racial environment by demonizing the Panthers and demonizing Obama? Are they whipping up a frenzy to bring out white voters?

Is the New Black Panther Party a racist hate group or a "crackpot fringe group", or do the Panthers and their leader Attorney Malik Zulu Shabazz have an intelligent message and program for the upliftment of Black People?

Who are the New Black Panthers? Do they have any support from other leaders? Why does everyone want to talk about them but are afraid to talk to them see why they are growing fast all over America and the world?

Come out and get the facts for yourself!

Talk to the members who charges were dropped against for yourself.

Special invite to the Black Press; Don't depend on the mainstream media for your stories or information about leaders and organizers in your own community. Come and talk to Dr. Malik Shabazz and the Panthers for yourself and get the truth about this raging national crisis.