Diesel TEK, Inc. announced today that it signed a national distribution agreement of its environmental engine cleaning system with The Larson Group who owns and operates Peterbilt dealerships throughout Missouri, Arkansas, Illinois and Indiana. 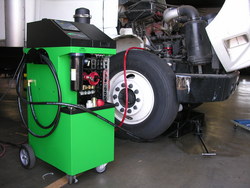 Diesel TEK, Inc., announced today that it signed a national distribution agreement for the U.S. market with The Larson Group who owns and operates Peterbilt dealerships throughout Missouri, Arkansas, Illinois and Indiana.

Eric Wheeler
begin_of_the_skype_highlighting     end_of_the_skype_highlighting, CEO, Diesel TEK, Inc. stated, “The Larson Group, Truck Rods and Peterbilt of Joplin have been serving the heavy duty transportation industry for years. Their customer service is unsurpassed in the industry. Their expertise and reputation are exactly what we wanted in a distribution partner to help us introduce Diesel TEK’s new technologies to the trucking and transportation community.”

Gary Larson, one of the owners of The Larson Group, said, “We are excited with this opportunity to bring Diesel TEK’s innovative Engine Flush System to the US market. Many rigs we service have elevated soot content and oil contaminants resulting from federally required emission control devices mandated on newer diesel engines. The Diesel TEK Engine Flush System keeps these trucks running clean and compliments existing emission technologies. Many other clients are holding on to their trucks longer and need the engine flush service to extend their engine life. Based on our initial customer feedback, Diesel TEK’s program should be widely accepted by both fleets and individual owner-operators.”

Initial testing of the Diesel TEK Engine Flush System at an EPA & California Air Resource Board certified laboratory, has resulted in a significant reduction in particulate matter and other harmful emissions along with a measurable increase in fuel economy. A copy of the actual test report is available by request from Diesel TEK or at Peterbilt of Joplin and Truck Rods.

Diesel TEK projects that the significant emissions reduction resulting from their Engine Flush System will improve EGR DPF and DPF sensor operation and enhance the performance of these recently mandated emissions devices.

Diesel TEK expects to have the Engine Flush System available in all 48 states by January 2011.

White Paper - The Diesel TEK Engine Flush SystemThe Diesel TEK CL-8 Engine Service System assists the function of the EGR and DPF systems that are currently being utilized on a majority of the current diesels in service today.