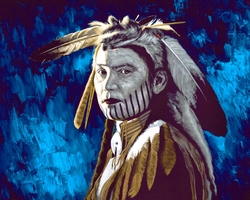 Ken Freeman was a wonderful artist. He appreciated the art and the heritage of the American West, which is the mission of the Phippen. We are so proud to host this world premiere

The Phippen Museum is, as they say, Cowboy Up with pride! The Prescott museum currently hosting the world premiere of Portraits of the West: The Kenneth M. Freeman Legacy Exhibition is noting record attendance for the exhibit. The display opened to the public on June 26, 2010, and continues through October 24, 2010. Details are available at the website: Phippen Art Museum or by calling the museum at 928-778-1385. The primary focus of the exhibit is on the cowboy and ranching life, so important to the history of this region, as well as Native American subject matter.

A temporary studio replica of Freeman’s own workspace serves as the centerpiece of this exhibition, providing intimate insight to the artist’s creative process. The unfinished Impending Decision IV, the final piece Freeman was painting at the time of his passing, will be on display to clearly illustrate Freeman’s painting technique. Earning scholarships to study at the American Academy of Art, Freeman studied techniques of the European old masters. Capturing the rich heritage of the many varied peoples he encountered in photographs, Freeman brought the personalities of these models to life.

For artist Kenneth M. Freeman, the cowboy hat and boots was not a gimmick or shtick. Neither was his Arizona attitude. Ken Freeman may have grown up in a traditional Jewish home in Chicago, Illinois but make no mistake … he was a cowboy.

“Ken Freeman was a wonderful artist. He appreciated the art and the heritage of the American West, which is the mission of the Phippen. We are so proud to host this world premiere,” Bentlage said. “The exhibit features Freeman pieces from the Legacy archives, some of which have never been exhibited. We also have an illustration Ken did for Coca Cola along with book covers for Will James and J.P.S. Brown; as well as a collectible plate series for Hamilton Collectibles with the corresponding original oil paintings.

Watch the video interview with Bentlage: Video on Kenneth M. Freeman's Portraits of the West.Bonnie Adams, Freeman Legacy curator, talked about selecting the pieces for the exhibit.“We brought out more than a hundred paintings from the archives of the Freeman Collection,” Adam’s stated. “Bentlage’s task was to narrow the selection down to the very best pieces for the exhibit to fit in the space allowed. We both decided that three pieces would really anchor the exhibition: Bronc Buster, Psychin’ Up and the portrait of http://www.shop.kennethmfreeman.com [John Wayne

, considered by the Wayne family to be the best portrait ever painted of The Duke.”

Bentlage adds, “George Phippen, one of the founders of Cowboy Artists of America, would have appreciated this exhibition as he had a lot of common interests with Ken and his love of preserving the American West. George enjoyed the real cowboy life and this exhibit celebrates the cowboy life.”

Adams explains the decision for the exhibition title, “Portraits of the West.”

“Ken always said he painted portraits,” Adam’s said. “Whether they were of cows or cowboys; his subjects were always a study in the story behind the faces he painted.” She added.

Portraits of the West – The Kenneth M. Freeman Legacy Exhibition is a travelling retrospective that provides a tribute to an internationally recognized Western artist and illustrator.

A Kiowa poet once remarked that the American West is a place that has to be seen to be believed, and it may have to be believed in order to be seen. Freeman had the talent to draw, paint and sculpt the West as he had seen and experienced it. His unique combination of light and depth of color, together with rich cultural heritage, has left us with a body of work that connect with the soul and spirit of the American West.

“Ken painted each piece three times. First he sketched on the canvas or board with pencil and then did a full value, burnt umber painting where he worked out all the details. When the burnt umber was dry, he laid down the color,” added Adams. “This was the style of the old masters, and this style had members of the press dubbing Ken Freeman as The Rembrandt of the Rodeo.”

“We plan to include key items from Ken’s original studio in the replica, such as his easel and palette,” Bentlage said. “The fact that the Kenneth M. Freeman Legacy has preserved the artist’s work space and contents provides an incredible educational resource.”

“He was a man you could never forget. His enthusiasm for life and art was contagious. Of all the artists from the Academy I've met over the years, Ken really stood out as one of a kind,” said Aron Gagliardo of the American Academy of Art.

“This particular show is very appropriate for the Phippen. Ken has exhibited at the Phippen before and we are excited about returning with this new exhibition,” Adams added.

These two collections are traveling retrospectives of the late Kenneth M. Freeman (1935 - 2008) who had a prolific career as both an illustrator and fine artist, primarily portraying the American West. Artist at Work and Portraits of the West presents a cross-section of Freeman’s lifetime body of work and range of mediums.

Works of Kenneth M. Freeman are in the permanent collection of the Smithsonian Museum, Library of Congress, American Art Academy, and Booth Museum as well as distinguished private collections. Accolades include winning competitions at the San Diego Museum of Art, the Hubbard Museum of Art, the Illinois State Fair, the Salmagundi Show in New York City, the Union League Club of Chicago, being chosen five times as artist for the Parada Del Sol Rodeo in Scottsdale, AZ and having a painting selected for the 1988 Prescott Centennial Rodeo. He was an illustrator for authors like Louis L’Amour.

Ken was known affectionately as “Rembrandt of the Rodeo” by members of the press. First Lady Barbara Bush, impressed with Ken Freeman’s southwestern art, invited him to show at the Smithsonian Institute in conjunction with the Native American Museum Extravaganza. Ken also had a one man show in 2007 in Milan, Italy at Fondazione Metropolitan. Kenneth M. Freeman website and you can acquire fine art of Kenneth M. Freeman at Online Store for the Kenneth M. Freeman Legacy

About the Phippen Museum

The Phippen Museum mission statement : To preserve and exhibit museum quality Western art and educate the public about the unique heritage, history, legends and influence of art of the American West.

George Phippen, first President of the Cowboy Artists of America, died in 1966, leaving behind a group of artists interested in creating a facility that specifically represented artists in the American West. In 1974, the George Phippen Memorial Foundation was formed to create a centralized venue that would fully support Western Art. The first annual Memorial Day Show was presented at the Prescott Public Library in 1974, featuring the finest of western sculptors and painters. For ten years, this show was the only financial means of the Foundation.

In the early 80s, the James Family Trust donated a parcel of land to the Foundation to begin the construction of the building for the future Phippen Museum. With the funds from the Memorial Day Shows and this generous gift, the Phippen Museum was able to open its doors to the public on October 13, 1984.

The Museum is in the process of expanding with another 10,000 square feet, adding rooms specifically for the purpose of collection development and research. The Phippen Museum is one of three museums in Prescott and is proud to be the only fine art museum in Yavapai County.

The Phippen Museum's permanent collection consists of paintings, etchings, drawings, bronze sculptures, photography, American Indian artifacts and jewelry that date from the late 19th century to the early 21st century. All materials in the collection are created by significant artists of the American West. The Phippen Museum art docents conduct monthly public tours of current exhibits. The public tour is offered the first Saturday of every month at 2:00 p.m. and is free with the price of admission.